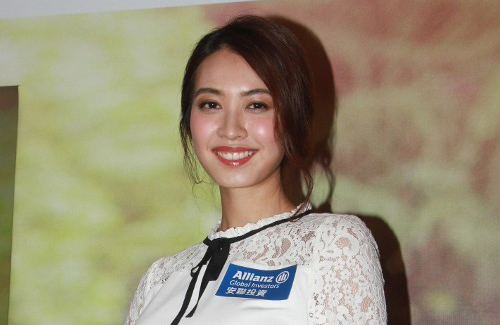 Currently in school to pursue a law degree, Tracy Chu (朱千雪) revealed that she is seeing a medical student. However, the couple seems to be in a long distance relationship.

As a special guest for a retirement financial planning event, Tracy talked about her own personal investment choices. Being risk adverse, Tracy prefers to save up penny-by-penny even if the yield is low.

Luk Ho Ming (陸浩明), who was also at the event, curiously asked if she would prefer a boyfriend who knows his way around investments. Revealing that she does not know a lot of friends who are investment savvy, Tracy admitted that she is actually in the early stages of a relationship with a medical student.

Surprised at her sudden announcement, Luk Ho Ming quickly asked for more details on her new boyfriend. Tracy laughed, “He’s very busy. Even his family has to schedule time in order to meet for him for dinner. He’s not in Hong Kong now.” Tracy quickly added, “We’re only getting to know each other, don’t force me to answer and scare them away!”

In a steady relationship with his girlfriend, Luk Ho Ming then changed the subject and asked Tracy if she would do the honors of being the lawyer to officiate his wedding in the future. Tracy disclosed that she still has two to three years before completing her degree; she will also need to practice law for another seven years before she can help him.

Having to pay tuition fees costing around $60,000 to $100,000 HKD, Tracy relies on shooting commercials and attending promotional events. Asked if that is enough, Tracy said, “It should be okay. I only need to work for expenditures. If I film a series, I won’t be able to accept jobs outside of that. A lot of the advertising companies are able to accommodate my school schedule.”