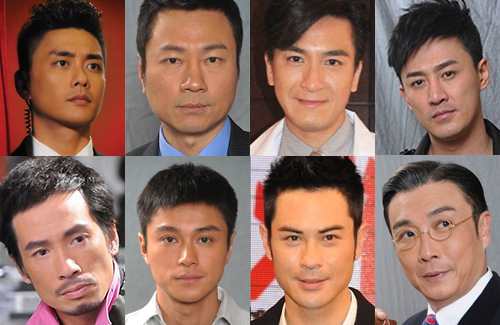 Who will be crowned as Hong Kong’s TV King of 2012? This year, TVB organized a one-vote-per-person system to select the Best Drama, Best Actor, and Best Actress awards, creating an environment for the audience to actively engage in the selection process.

The 2012 TVB Anniversary Awards will be airing live this Monday at 8 PM on TVB’s Jade, HD Jade, their online channel, myTV. A total of 10 nominees are nominated for TV King, but who will ultimately take the golden trophy home? Here are some of our candidates’ thoughts!

Kenneth Ma (馬國明) – The Hippocratic Crush < On Call 36小時>
Kenneth’s popularity skyrocketed after the broadcast of The Hippocratic Crush, and his same performance won him Best Actor at Malaysia’s My Astro On Demand Favorites Awards earlier this month. Kenneth was once very vocal in expressing the flaws of the one-vote-per-person system, but nonetheless admitted that his confidence strengthened after winning Malaysia’s TV King. However, Kenneth believes that he has a higher chance to win the TVB Favorite Male Character instead.

Kevin Cheng (鄭嘉穎) – Gloves Come Off <拳王>
Kevin Cheng is the biggest breakout Hong Kong television actor of 2011, and the 43-year-old actor had already won three Best Actor awards for his performance in Ghetto Justice <怒火街頭> last year. The two-time TVB Best Actor winner, however, does not have high hopes in winning this year, but expressed that he is still excited to be able to partake in the TV King race this year. “I know I will not be the main character this year,” said Kevin. “But I will support my brothers! To be honest, everyone has a chance this year. Let’s not talk about Wayne Lai; he is always the hot favorite! Also Raymond Lam! But in my biased opinion, I think Kenneth Ma will win! He has been waiting for a drama like The Hippocratic Crush for a long time. Now that he has won Malaysia’s TV King, I think he has an even higher chance to win now!”

Raymond Wong (黃浩然) – Gloves Come Off <拳王>
Raymond Wong was nominated for two awards for two different performances – Best Actor for his performance in Gloves Come Off and My Favorite Male Character for The Confidant. “This year will definitely not be my year,” said Raymond with a smile. “But being nominated for two categories is already a very big encouragement! I will face the awards with an ordinary mindset. What I really want is to see The Confidant win Best Drama!”

Bosco Wong (黃宗澤) – Witness Insecurity <護花危情>
Currently the highest-rated television drama of the year, Bosco’s portrayal of Hui Sir also created early buzz for a possible Best Actor win. Bosco expressed, “I am competing against so many seniors this year. I have no confidence to win [Best Actor].” Instead, Bosco said he hopes to see Witness Insecurity win Best Drama.

Moses Chan (陳豪) – The Last Steep Ascent <天梯>
Like Kevin Cheng, Moses Chan, 2007’s TV King, also believes that he will not be the main focus at this year’s award ceremony. “I do not see awards to be very important,” said Moses. “But I absolutely agree with the one-vote-per-person system. The more participants, the better! I was also very vocal about supporting the telephone voting system in the past.” As for Moses’ favorite candidate to win TV King, Moses cried, “Wayne Lai! Always been, and always will!”

Raymond Lam (林峯) – Highs and Lows <雷霆掃毒>
Critics and audiences alike agree that Raymond Lam is definitely this year’s clear front-runner. With such a large Hong Kong and overseas fan base, some critics believe that TVB’s new voting system was meant to have Raymond take home the award. Raymond explained, “It is not out of the ordinary for fans to vote for their idol. I put my best effort with every performance I do. I never slack off.”

Damian Lau (劉松仁) – Silver Spoon, Sterling Shackles <名媛望族>
The veteran actor’s career spanned over four strong decades, and it is for this reason that Damian has already lost interest in winning any kind of award. Since day one, Damian has already expressed that he is giving up in the TV King race. “The awards are for the young ones,” Damian laughed. “I have no chance… I voted for my son, Kenneth Ma! If I was the audience, I would definitely vote for the younger ones!” Although Damian supports the one-vote-per-person system, he suggested that an even fairer system would be to split the awards into two categories – one winner chosen by the judges and another by the audience.”

Wayne Lai (黎耀祥) – The Confidant <大太監>
Along with Raymond Lam, Wayne Lai is also a front-runner to win TV King this year. Asked if Wayne, already a two-time TVB Best Actor winner, believes that he has a high chance to win this year, Wayne admitted, “It really depends! Certain dramas will always get certain benefits every year. In the past, it has always been said that drama that air towards the end of the year gets more publicity, but it is not really the case for this year!” Wayne expressed that he has confidence in winning this year, but if he also believes that Raymond Lam has a very high chance of winning. “He is maturing and has his own special style. This is what Raymond Lam succeeds in.”

10 comments to TV King Nominees’ Final Words: “Will I Win?”