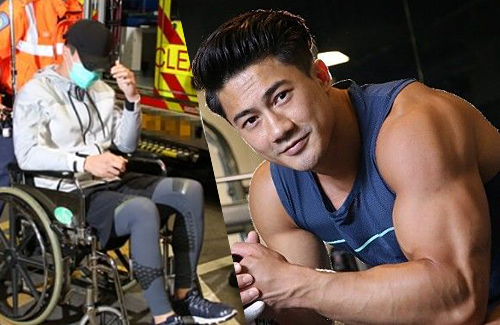 TVB actor Arnold Kwok (郭子豪) experienced a surge in popularity since the airing of Life on the Line <跳躍生命線>. He was arrested for driving under the influence this morning at 12:30 a.m. He had an alcohol level double the legal amount and was taken to Hong Kong’s Queen Elizabeth Hospital after he indicated that he did not feel well. He was released on bail and is required to report back to the police in the beginning of May.

Born to wealthy parents, Arnold doesn’t like to be known as a rich second generation despite his privileged background. He studied mechanical engineering at Imperial College London, and later returned to Hong Kong. The model-turned-actor has slowly worked his way up at TVB in the last three years, building name recognition for himself as a bodybuilder and fresh new face to watch out for.

The media reached out to Arnold immediately after the arrest. The 27-year-old actor initially denied the incident and replied by text, “I’m currently at home and have not been driving today.”

However, later in the day he replied by text message again, “I sincerely apologize for the incident that happened last night. As I am currently undergoing legal procedures, I am unable to comment further. I will be providing full cooperation in the investigation and will be responsible for any inconvenience caused by my actions. This morning when responding to the media, I lied because I was confused and in shock. My family did not know of the situation yet and I did not want them to worry. I apologize again and I promise to drive safely in the future. I will not let my mistakes affect others.”