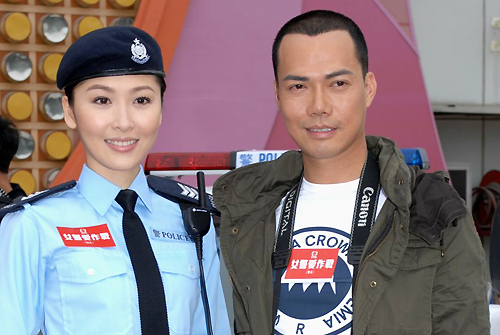 After TVB drama, Sergeant Tabloid <女警愛作戰>, was first broadcasted in mainland China, Malaysia, and Australia in April this year, the series had been receiving encouraging responses from viewers, and was discussed vigorously by netizens. Even before it is launched in Hong Kong, TVB was interested in filming a sequel. Sergeant Tabloid was originally scheduled to be broadcasted in Hong Kong at the end of August, but it has been replaced by Liza Wang’s (汪明荃) Divas in Distress <巴不得媽媽>

There were earlier speculations that TVB was angered by Niki Chow’s (周麗淇) decision to join Mountain Entertainment instead of signing a management contract with them. Rumors surfaced that TVB will shelve aside Sergeant Tabloid since the drama was not broadcast in August. However, it was understood that Sergeant Tabloid was illegally uploaded on various websites. In order not to affect the ratings, TVB will present a new special edition to the Hong Kong viewers and thus delay the broadcast.

Sergeant Tabloid was uploaded by netizens on YouTube and various Chinese websites before it was even broadcast in Hong Kong. Aside from Sergeant Tabloid, many TVB series such as D.I.E. <古灵精探>, Men with No Shadows <不速之约>, Heart of Greed <溏心风暴> and When Heaven Burns <天与地> had encountered similar situations before, where the finale episode was leaked online prior to the television broadcast.

Nicki Chow and Mandy Wong (黄智雯) expressed their dismay at the exposure of the series online. Nicki said, “I do not know what has happened. I will leave it to the company to handle and investigate the source. This is illegal. Everyone had a hard time filming, and we hope that the series copyright will be respected. This is hard to control, but netizens should not upload the series online because this is illegal.”

Mandy Wong also expressed her opinion on the issue, “If there is such situation, it will ruin all the actors’ efforts! The filming process is very tough; all the actors want to see the results and we hope everyone will respect the copyright.”

New Edition Will Be Richer in Plot and Emotions

Dubbed as the new version of Beauty Knows No Pain <女人最痛>, Sergeant Tabloid will explore the issues faced by modern working women. The series also features sensitive issues such as non-local pregnant women giving birth in Hong Kong and real estate hegemony. Some of these scenes were removed from the overseas edition. The new edition of Sergeant Tabloid will undergo another round of editing to thicken the plot and add more depth to the cases featured in the series.

Many overseas viewers found the pairing of Michael Tse (謝天華) and Niki Chow to be refreshing, but complained about the lack of romantic development between the pair. Taking into account of the feedback of the viewers, the new edition will increase more emotional scenes between Michael and Niki. Emotional scenes of Mandy and Matthew Ko (高钧贤), where were not featured in the overseas version, will be added into the new edition.

All the actors were asked to re-shoot a new ending. Niki was excited about the new edition and said, “The new ending will be kept in secret, viewers will enjoy it. There are some sensitive issues involving non-local pregnant women and the Hong Kong Chief Executive. These scenes were cut from the overseas edition. I hope that the Hong Kong viewers can see all these scenes, and this will be the authentic version!”