After Gillian Chung (鍾欣潼), Charlene Choi (蔡卓妍), and Kenny Kwan (關智斌) returned to Hong Kong from Malaysia on March 24, they each went back to their respective homes to self-isolate for 14 days. A few days ago, they spent the last day of their quarantine together virtually.

The three stars started a video chat with good friends Yumiko Cheng (鄭希怡) and Joey Yung (容祖兒). For two hours, they exercised, chatted, and ate dinner together. Joey shared, “They finally finished their self-isolation, but we were still able to chat like classmates.”

Charlene posted screenshots of the video chat session onto social media and revealed Kenny grew tired of it quickly. She said he was so bored that he kept yawning. “Informal research has found that men are not as into chatting about nonsense,” Charlene wrote.

She said they had a lot to talk about, and the topics were never-ending. Netizens suggested that they should include Hins Cheung (張敬軒) next time. 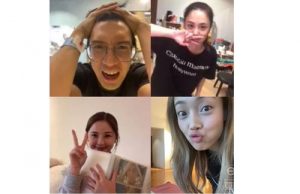 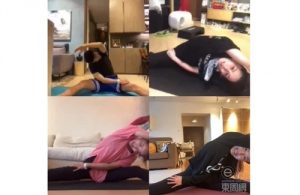 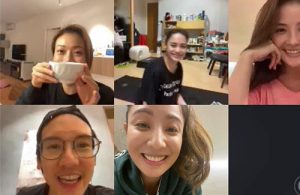