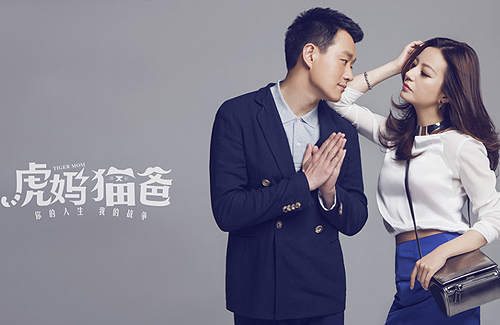 In Tiger Mom, Vicki portrays Bi Shengnan, a young mother whose given name literally means “better than men,” while Tong Dawei plays her husband Russell. The two are a happy couple and enjoy their simple life with their five-year-old daughter – that is, until Shengnan discovers that all of the other mothers living nearby have been busy worrying about the education and upbringing of their children. In a blink of an eye, she transforms into a strict disciplinarian mother whose views on raising children clash horribly with those of her gentler husband.

Prior to Tiger Mom, Vicki and Tong Dawei worked together on the epic two-part war film Red Cliff <赤壁>, as well as the touching child abduction movie Dearest <親愛的>, for which Vicki won many accolades. They also have a third film collaboration coming up, the comedy Hollywood Adventures <橫衝直撞好萊塢>, which is set for release in June.

Tiger Mom, however, is the first time the two have depicted a couple, and their convincing chemistry has led to netizens asking Tong Dawei if his real-life wife ever feels jealous when watching the series. On the day of the drama’s premiere, Tong Dawei also publicly praised Vicki for her beauty when interacting with fans on Sina Weibo, and commended her for “always surpassing [his] expectations with her acting.”

Another of Tong Dawei’s dramas, Think Before You Marry <想明白了再結婚>, is nearing the end of its broadcast on Zhejiang Satellite TV and Shenzhen Satellite TV. Many fans have found it humorous that Tong Dawei is appearing in two simultaneously airing dramas, one of which talks about the path toward marriage, while the other discusses life after marriage.

The actor himself commented, “Think Before You Marry will let audiences consider the why behind marriage, while Tiger Mom can explain some of the confusion young couples may have toward raising and educating children.”