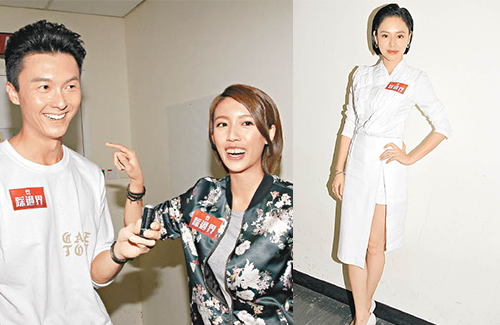 Though Vincent’s character will not have a traditional love interest on the show, he will share a few intimate scenes with his costars. The Over Run Over <EU超時任務> star shared that he just filmed an “extremely intense” bed scene with Ali, who plays a judge.

“I’ve never filmed such an intense scene in my life,” said Vincent. “She kisses me, and we start making out. We kiss all the way to a bed, and I’m also shirtless. I’ve been going on a diet for that,” he added. “It’s definitely a challenge. She’s very comfortable to work with.” (How many pairs of pants did you wear?) “Three! A pair of extra underpants and long pants. Just in case. Don’t want things to turn awkward.”

Sisley was also present during Vincent and Ali’s bed scene. “My character likes him,” explained Sisley. “I was under the bed and I saw them kissing. I was having a horrible time, but they were having a great time.”

“Just doing our job,” Vincent said with a laugh.

Asking if Vincent had notified his wife, Yoyo Chen (陳自瑤), about his scene with Ali, Vincent said, “I told her about it before we shot it.”

Zoie Tam, who plays a body art artist, had to show a lot of skin for her role. She explained, “I don’t really have to go nude. I just had to show bits of my back, chest, waist, and legs.” (Was it embarrassing to shoot?) “I haven’t had such a sexy role before. I’m not worried. I’ve expected it. I’m more worried about how my body would look on camera. I’ve been doing a lot of sit-ups and have been communicating with the producer and director about how I should do the scenes. They’re pretty daring.”