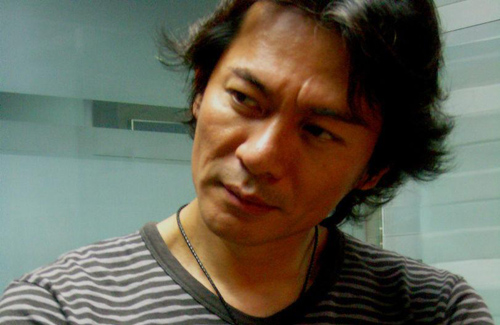 Kong Wah (江華) has been in the industry since the mid-eighties. Though the ATV-turned-TVB actor does not have an expansive filmography, he was once one of TVB’s most popular and acclaimed actors, and almost every production he starred in would end up being a hit series. His last two series with TVB, The King of Yesterday and Tomorrow <九五至尊> and The Conqueror’s Story <楚漢驕雄>, added to his acclaimed resume.

After announcing his departure from TVB in 2004, Kong Wah left Hong Kong to shoot a Mainland Chinese series. The fans and the media looked forward to Kong Wah’s expansion in China, but after shooting the 2009 period drama Life in Sanyuan County <跟紅頂白大三元>, Kong Wah went into a hiatus. For the next few years, Kong Wah stayed behind the scenes, only occasionally making public appearances when his wife, Connie Kitman Mak (麥潔文), held singing events.

Kong Wah’s slow steps away from the entertainment industry left behind many questions. Kong Wah’s passion for acting remains, but reports say that since he injured his waist and leg in 2006, he has developed signs of depression. He has completely stopped shooting television and films since 2009, and his wife Kitman became the sole breadwinner of the family.

Kong Wah once admitted in an interview, “The doctor told me that my cartilage pressed against my nerves. For an entire year, I could not stand or sit. It was painful. I was scared, scared for my family, and I didn’t know what I would be able to do if I changed careers. I felt like I’ve fallen into a situation where there was no way out. I almost had a nervous breakdown. I didn’t know what to do, and was very depressed.”

He also admitted that he was scared he would commit suicide, revealing that he had experienced some hallucinations. “I saw people who were already dead. I knew it was a hallucination, felt so perplexed, and was scared that I would kill myself. I lived like this every day.”

Though Kong Wah has managed to control his mental state, he was afraid that his situation would rebound, and decided to turn down all acting offers that were handed to him. “Now, acting has become something like eating chicken ribs – it doesn’t taste good but it’s a pity to discard it. However, I would not force myself to act for a living.”

Kitman, a popular singer and actress in the eighties, retired from the entertainment industry soon after marrying Kong Wah in the early nineties. They have two children, a son and daughter, and used to live in an independent luxury house from Palm Springs, Yuen Long. Though Kitman brought in good income as a vocal teacher, it was not enough to support their upscale lifestyle. The family of four left their Palm Springs estate two years ago and moved into a village house in Sai Kung. Recently, reporters discovered that the family is currently living in a rented village house in Sha Tau Kok, a two-hour distance from the city.

Kong Wah’s house is situated next to a farm and the closest grocery store is at least twenty minutes away. A neighbor in Sha Tau Kok revealed, “Kong Wah’s family moved here several months ago! They live on the bottom floor. Mrs. Kwong chats with us all the time. I usually see her leave the house really early in the morning. She says she teaches singing. She doesn’t return home until after buying groceries at night.” The neighbor added that while Kitman was busy at work during the day, Kong Wah sulked at home and rarely interacted with the neighbors. “He would occasionally come out and wash his car though. But it’s odd how a big celebrity like him would degrade himself to live in a 700 square feet village house.” Kong Wah’s current village house has a rental price of $7,000 HKD a month.

“I have a great wife,” said Kong Wah. “She would not complain about how I have no income. She understands me, knows I am someone responsible, and never gave me pressure. She lets me do whatever I want.”

On April 1, a reporter met up with Kong Wah, who was taking his wife to a memorial music show for Leslie Cheung (張國榮). He seemed a bit offended that the reporter knew about his current living quarters in Sha Tau Kok, quickly saying, “Yes, I moved because I’m poor. I have no money to live in a mansion. That’s why I moved to Sha Tau Kok!”

He said he does not mind about the inconvenient location, saying that Hong Kong is a small city and it is easy to get around. He denied that he is currently jobless, saying that he “occasionally works” when he felt like it.

Asked if TVB had called him back, Kong Wah said, “I’ve always had a basic contract with TVB. It’s not because they don’t want me, but it’s because I don’t want to film! I was the one who didn’t want to renew my contract.” Asked if he had any mainland Chinese drama offers, he said, “I haven’t come across a good script recently. So no.”

At the memorial concert, Kitman said, “We don’t want fame and wealth anymore. We want to live a peaceful and natural life. Sha Tau Kok is not bad. There isn’t much people, the air is good, and it’s very comfortable.”