Kong Wah’s Daughter To Debut As A Singer 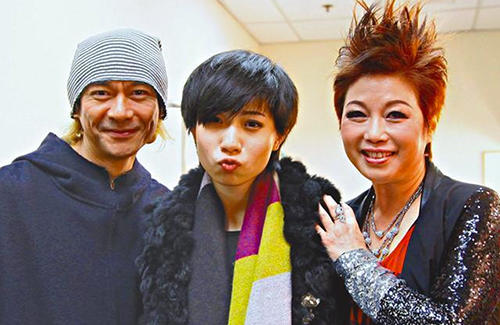 A new wave of second generation celebrities are coming our way. Last month, it was reported that Denice Lam (林鈺洧), daughter of 80’s television star Wilson Lam (林俊賢), and Kent Tong’s (湯鎮業) twin sons, Bruce (湯君慈) and Chris Tong (湯君耀), will be entering the entertainment industry. This month, it has been confirmed that Chan Cheung Tin (陳薔天), daughter of Kong Wah (江華) and Kitman Mak (麥潔文), will be soon debuting as a singer.

Former TVB star Kong Wah and his veteran singer-actress wife, Kitman Mak, have been out of the industry for a while. While Kong Wah has changed careers to become an insurance agent, Kitman semi-retired from the entertainment industry to take care of her family and become a vocal teacher.

Recently, it was reported that Kong Wah has been getting love calls from many record labels. Originally it was thought that the record companies were interested in signing Kong Wah, but it turns out that Kong Wah was meeting with the labels on behalf of his daughter Tin Tin, who is interested in making a debut as a singer.

Due to her mother’s influence, 20-year-old Tin Tin has had an interest in singing ever since she was very little. She has uploaded videos of herself singing on YouTube, her unique style attracting many talent scouts from numerous record labels.

Her mother, Kitman, admitted that her daughter is currently in the midst of signing with a record label. She shared that Tin Tin has expressed her desire to become a singer ever since high school, and told her parents that she didn’t want to go college, wanting to focus on developing her singing voice. Kong Wah and Kitman respected Tin Tin’s decision.

Kitman, who is also acting as Tin Tin’s vocal trainer, said, “She does have singing talent. She told me she wanted to join the music industry after graduating from high school, so I told her to train hard before doing so.”

Tin Tin has been spending five to six hours everyday doing vocal training. “Since she’s so passionate about singing, and very hardworking, I decided to let her try it out. At the moment, she still needs more practice, but with more experience, she can improve.”

In related news, lyricist Keith Chan’s (陳少琪) daughter, Jocelyn Chan (陳明憙), is also planning to debut as a singer. Jocelyn, who has experience performing in music bands, graduated from the University of Southern California. Keith was initially against his daughter’s wish to join the entertainment industry, but ultimately decided to support her. Jocelyn will be debuting as a singer-songwriter.