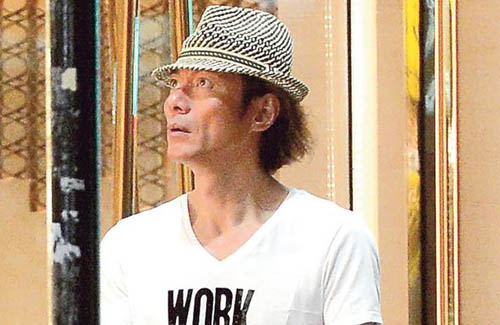 Kong Wah (江華) has been off the public’s radar since 2009, but his recent gaunt look put the 51-year-old back onto newspaper headlines this week with many concerned about his state of health.

Although the veteran actor has always maintained a slim and fit physique, recently he seems much thinner than he has ever been. A local reporter spotted Kong Wah and his wife Connie Mak (麥潔文) enjoying a date in public. Wearing shaggy hair beneath his hat, his cheeks were visibly sunken though his arms were toned and lined with popped-out veins. Despite his pale and emaciated-looking face, Kong Wah seemed otherwise healthy and agile.

Succumbing to depression following an injury in 2006, Kong Wah has taken a long break from filming and has not made an on-screen appearance since 2009. Although he still welcomes filming offers, so far he has not received a good script and chose to stay out of the limelight. His wife Connie became the sole breadwinner of the family. While they have been popular stars in the past, both expressed that they wish to leave their celebrity statuses behind to focus on living a normal life.

Still very much devoted to his wife after over twenty years, Kong Wah was attentive and loving during the couple’s recent day time stroll. Holding hands as they window-shopped, the two frequently stopped to take photos of each other, looking like teenagers in love.

When asked to comment on her husband’s frail-looking state, Connie denied any problems, saying that Kong Wah has always been healthy and is living a comfortable life. Kong Wah himself also assured that he is in tip-top shape, saying that he is working hard to maintain a consistent weight. “I am trying to maintain the figure I had when I was seventeen. Many people my age gain weight and end up with a big tummy. Compared to them, everyone must think I have become thinner. Right now my face fits the international beauty standard, perfect from every angle.”

Achieving calmness through religion, Kong Wah has discovered valuable insights about life. Making his wife and his family top priority, he would rather spend quality time with those he love than to sacrifice it all for his career. “Living should feel happy and natural. The most important thing is that we are living well. We can be very happy even though we’re living in Sha Tau Kok.”