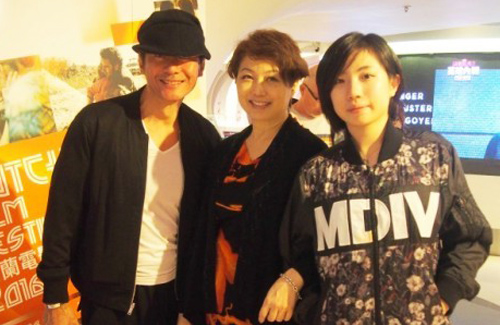 Fifty-three-year-old Kong Wah (江華) began his career in the entertainment industry in 1989. The well-rounded Hong Kong actor and singer enjoyed much success throughout his career and was once one of TVB’s most versatile and popular actors. Leaving TVB in 2004, Kong Wah ventured into the Mainland China market, but took an unplanned hiatus in 2009 after suffering from a back injury.

Forced to halt his career to nurse his health, the veteran actor slowly began to fade out of the limelight. Faced with an ominous outlook in his health and career, Kong Wah allegedly suffered from depression. His wife, Connie Mak (麥潔文), became the sole breadwinner of the household, but continued to stay by his side and supported him tirelessly. In 2015, Kong Wah mostly recovered from his injuries and shared in an interview that he has begun working as a life insurance agent for Prudential Insurance Company.

With a new goal to work towards, Kong Wah’s mental state improved tremendously. He was recently spotted out shopping with his wife and 21-year-old daughter, Chan Cheung Tin (陳薔天), who debuted as a singer late last year. Kong Wah was purchasing movie tickets for his family. Despite being out of the spotlight for many years, Kong Wah smiled pleasantly and interacted with fans. He graciously accepted all requests for photos. The female fan also complimented on his good looks and fit physique.