Actor William Chan (陳偉霆) has been confirmed to star opposite Yang Mi (楊冪) in xianxia romance Novoland: Pearl Eclipse <斛珠夫人>! With scenes of the two leads locking lips in an earlier trailer released, fan anticipation is pushed to an all-time high!
What to Anticipate 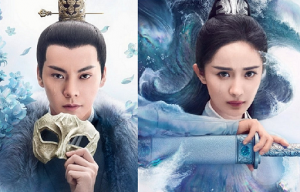 With the previously released teaser attracting some 76 million views, the Novoland production crew followed up quickly with the release of drama stills and character posters.
Depicting the two gazing at each other from opposite spheres, Yang Mi is seen wielding a sword in a gallant pose while William stands amid a sea of flowers holding a masquerade mask, both tearing up from their longing for each other. Reacting positively to the posters, netizens praised Yang Mi and William for captured the aura of the characters from the original novel. 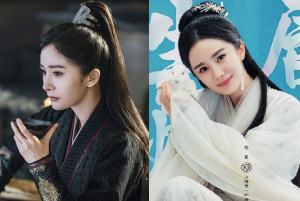 Yang Mi’s character Hai Shi, the remaining merwoman from her tribe of merfolk will disguise herself as a male to become Fang Zhu’s disciple.
Despite having left the league of young actresses in age, the 35-year-old’s portrayal of both the masculine and feminine characters looks promising and does not pale in comparison with younger actresses! 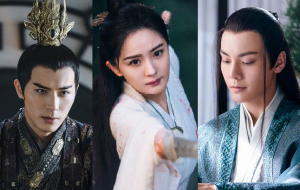 Garnering popularity with his role as Zhang Qi Shan in the drama Mystic Nine <老九門>, 35-year-old singer and actor William Chan has even earned himself a presence in Madame Tussauds Shanghai.
His character Fang Zhu takes in Hai Shi (Yang Mi) as disciple, and the latter later becomes a bodyguard to and emperor Zhu Zhongxu, played by rising actor Xu Kaicheng (徐開騁). With the three entangled in a love triangle, their onscreen dynamics will be interesting to watch!

Given that Novoland: Pearl Eclipse is a heavyweight production by Yang Mi’s Jaywalk Studio, much attention is paid to finer details of costumes and props, and fans are also looking forward to stunning visuals in this rendition!