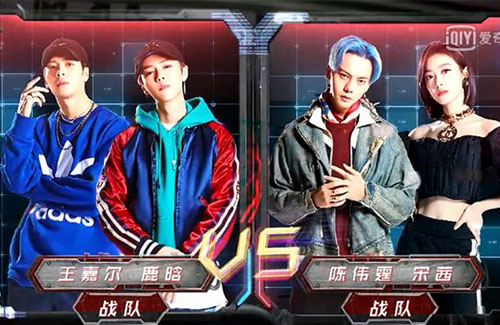 The four team leaders opened the show by performing their own solo dances alongside their own dance instructors. Lu Han’s solo performance was choreographed by Rie Hata, who Lu Han said had created one of the hardest dances he’s ever had to do.

“It was fast-paced and I was afraid that I wouldn’t be able to do it. I also had to dance it with her on stage, just the two of us, so the comparisons would definitely be apparent. There’s even more pressure there.”

After all team leaders completed their solo, the 191 contestants submitted their votes on who’s team they wanted to join. William joked at the time that he wanted to be in fourth place so he could show viewers more improved sides of themselves. After realizing that he did lose to Lu Han and Jackson’s team, the actor turned around with an embarrassing smile and slapped a hand over his face.

HBDC broke 100 million viewers 40 minutes after the first episode went on air. Scoring high ratings and trending on social media, the show is being pitted against Street Dance of China <这！就是街舞>, a similar hip hop dance show produced by Youku. The appearance of well-known and coveted street dancers in HBDC is attracting much more viewers to tune into the survival show. Some of the competitors that have appeared in the first episode include popping master Feng Zheng (冯正), hellodance’s Huang Xiao (黄潇), and world-winning locking master Xiao Jie (肖杰), KOD’s world championship for four years in a row. He was also the first Chinese dancer to win the championship in Japan.