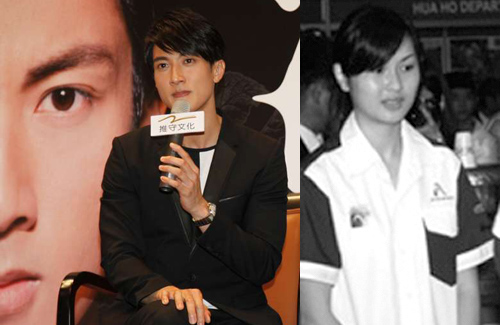 Above: Wu Chun and wife Lin Li Ying are expecting their baby son in October.

After admitting to his married status, Wu Chun (吳尊) further revealed that he and his wife are now expecting a son.

On October 2, Wu Chun held a press conference in Taiwan to promote his new book Ignite Courage <決定勇敢>. Due to Wu Chun’s shocking marriage revelation, he appeared very nervous, his face tense and his hands clutched tightly onto his microphone. To ease his nerves, Wu Chun’s team invited good friend and famous TV hostess Matilda Tao (陶晶瑩) to lead the show. Wu Chun’s father was also in attendance to show his support, while his wife sent encouragement via text message prior to the event.

Wife Wanted Marriage to Be a Secret

Dressed in a solemn black suit, Wu Chun immediately bowed down 90 degrees as soon as he stepped onto the stage. He explained that he had always wanted to share the news about his marriage, but refrained from doing so due to his wife’s wishes. “She has her own opinions. I must respect her decision. Perhaps she feels ready to bravely face and share the news after becoming a mother, and decided to reveal the truth.” He also spoke briefly about his daughter. “I was married in 2009, and my daughter was born in 2010. She is almost three years old. When my daughter was born, I was there to document her birth with photos and videos.”

A hands-on dad, Wu Chun has been taking care of all the details of his daughter’s life, becoming quite skilled at feeding, bathing, and changing diapers. He also proudly shared that his daughter can now point him out from Fahrenheit <飛輪海> posters. When asked, Wu Chun rates himself as a decent husband and father, giving himself 90 points.

Expecting a Son in October

Wu Chun’s parenting skills will certainly come in handy once again. At the press conference, the 33-year-old shared another piece of happy news. “My wife is actually pregnant with our second child and is about to give birth. Together we will have a boy and a girl. [My son] will also be a Libra like my daughter.” Turning 34 on October 10, Wu Chun will share the same astrological sign with his two children.

Sharp-eyed reporters noticed that a photo of Wu Chun’s wife Lin Li Ying (林麗瑩) appears in his new book. In an old black and white photo, Li Ying was seen standing close-by as Wu Chun introduced his gym’s latest exercise equipment to Brunei’s sultan. The book also contains a close-up photo of his daughter’s tiny hand held tightly onto his own.

When asked to discuss his relationship with his wife, Wu Chun shared that the two argued often during their first year together but always managed to resolve their differences by the end of the day. He praised his wife for always trusting him despite being surrounded by the many temptations of the entertainment industry. He added that he is easily pleased and treasures what he already has. Wu Chun also took the opportunity to dispel rumors linking him to former co-stars Angela Chang (張韶涵) and Ella Chen (陳嘉樺), saying that they are only colleagues and that he had never spent time with either alone.

Regarding his announcement’s impact, Wu Chun stated that he was never concerned about how his married status could affect his career or his income, saying “My family has always been the most important thing to me!” He explained that if he truly cared, he would not choose to only film one project a year. Wu Chun also denied allegations that he revealed the news only to generate noise for his new book. He vowed to donate royalties received from his book, and will also donate an additional $1 million HKD to improve the education of needy children in Taiwan, Hong Kong, China, and Brunei.

At the end of the event, Wu Chun once again bowed deeply for three seconds. He apologized for his nervousness and said, “I may have spoken or behaved wrongly before. I hope everyone will forgive me. Here I will apologize to everyone. I am sorry.”