They will lead Yu Zheng’s next drama, a “culinary” version of “The Story of Yanxi Palace”.

The producer behind many mega drama hits such as Palace <宫>, Demon Girl <半妖傾城> and The Story of Yanxi Palace<延禧攻略>, producer Yu Zheng (於正) has single-handedly propelled many actresses including Yang Mi (楊冪), Wu Jinyan (吳謹言) and Yuan Shanshan (袁姍姍) to stardom, proving his unique eye for talent and astute grasp of entertainment trends.

Recently, the quick-talking producer announced on social media his next period drama Imperial Cuisine <尚食> which he described as the culinary version of the mega-successful The Story of Yanxi Palace, to be set in the Ming dynasty. Touted as the Chinese version of popular Korean drama Jewel in the Palace <大長今>, the new drama stars Xu Kai (許凱) and Bai Lu (白鹿) as leading cast. 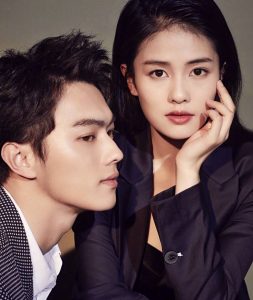 This marks the fifth onscreen collaboration for Xu Kai and Bai Lu who have paired up romantically twice in The Legends <招搖> and Arsenal Military Academy <烈火軍校>. Yu Zheng also boasted that “A-list actresses will all go crazy once they see the script”. While it remains to be seen if Imperial Cuisine will be as successful a hit as Yanxi Palace, the drama is not expected to perform too badly.

Refusing to Back Down to Fans’ Pressure

However, some of Xu Kai’s fans are annoyed that the 24-year-old star lacks diverse projects and he has been paired with the same few actresses ever since signing with Yu Zheng’s company. After a few days of negative comments brewing online, the producer responded harshly by saying he is “not the least concerned about how they feel” and told these fans to “stop supporting Xu Kai as soon as they can”, showing his firm attitude to do things his way and ignore public outcry.

To fans who harbored some hope and asked if they could watch Xu Kai’s individual scenes on MangoTV platform, Yu Zheng replied them directly with sarcasm, “It’s best if you don’t watch any [dramas]; just purchase a photo of the star if you like. How about you decide the [filming] angles too?”