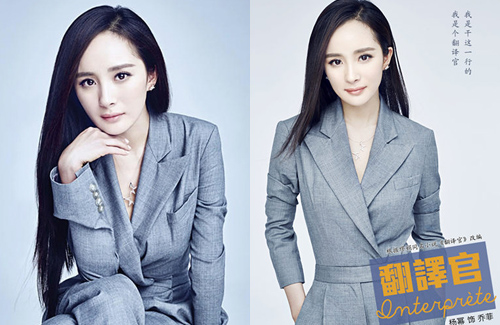 Yang Mi (杨幂) will be making a comeback to the small screen with the television drama Interprète <翻译官>. Interprète marks Yang Mi’s first official filming project after giving birth to her daughter in Hong Kong in June 2014.

Interprète is adapted from the 2006 Chinese novel Les Interprètes <翻译官>, written by Ji Huanhuan (纪缓缓). A romantic comedy, the story focuses on the story of new graduate Qiao Feng, who learns to be one of the country’s best French interpreters and translators under the guidance of the talented Qing Jiayang. Feng initially dislikes Jiayang, but the young pair eventually grow much closer after supporting each other through hard times.

Yang Mi will be playing Qiao Feng, the story’s brave heroine, and will be reciting many lines in French in the series. The production team released two character posters featuring Yang Mi, as well as a short teaser video.

The novel has a large following online, and Interprète is considered to be one of the year’s most anticipated dramas. Interprète will also be Yang Mi’s only television drama project for 2015.

An actor to play male lead Qing Jinyang has not been decided yet, but sources say that the team is looking for an actor who can match with Yang Mi’s popularity and star power. The production team of Interprète asked fans to send in recommendations.