A comic strip posted on Weibo went viral for claiming that a popular Chinese star had an intimate relationship with one of his fans. Although the identity of the artiste was not revealed, You Are My Glory <你是我的荣耀> actor, Yang Yang (楊洋), was dragged into the rumor mill for matching the description of the character in the comic.

A gossip columnist by the name of “A Girl Who Eats Melon Zhang Xiaohan” (吃瓜少女张小寒) published a comic strip, after receiving a tip from a netizen claiming to have dated a popular star.

Hoping to date outside the entertainment circle, the celebrity grew close to one of his fans and they started dating. At the start of the relationship, the fan gifted him many expensive gifts and in return, he impressed the fan by playing her favorite song on the piano at his birthday fan meet.

The two had an intimate relationship, and their WeChat conversation revealed that he asked the fan to take birth control pills whenever they had sex. Their two-year relationship continued until the star suddenly stopped responding and disappeared in July 2021.

Is Yang Yang the Male Celebrity in Question?

Many netizens speculate that Yang Yang is the male celebrity, as he was linked with rich starlet Bridgette Qiao Xin (喬欣). He had also travelled to Dubai in 2019.

However, some netizens disputed the credibility of the comic by insisting that Yang Yang played the piano at his birthday fan meet in 2018, which was before he started the rumored relationship with the fan.

Yang Yang’s management agency quickly responded to the rumor, “Just got off the plane, and I read the unfounded Internet rumors. They used an ‘anonymous’ source to write nonsense. We have enlisted a lawyer to collect evidence. Yang Mao [Yang Yang’s fan club] and the audience can sit tight and watch the show unfold.” 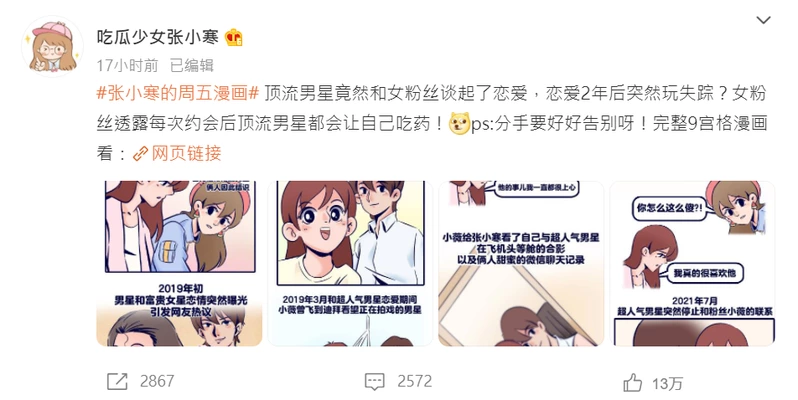