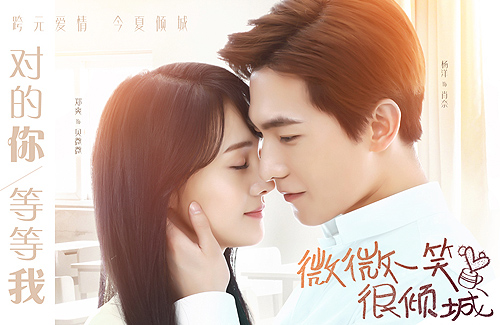 Adapted from a Gu Man (顧漫) novel of the same name, Love O2O tells the story of top computer science student Bei Weiwei (Zheng Shuang) and computer whiz Xiao Nai (Yang Yang). The two of them initially meet through an online game and later become acquainted in real life. The “O2O” in the drama’s title is drawn from the nature of their relationship, which goes from online to offline.

Because both of the story’s main characters are described as extremely good-looking, fans have placed much focus on Yang Yang and Zheng Shuang’s kissing scenes. Yang Yang announced that Love O2O will showcase many different types of kisses – “aggressive ones, sweet ones, and ones where we are shaking from eagerness” – and promised fans they would not be disappointed.

In addition, Yang Yang admitted that he was initially nervous about all of the kissing scenes, but he decided not to put too much thought into them and rather focus on depicting them well. Zheng Shuang also shyly stated that she felt like a little princess every day on set.

As expected, both Yang Yang and Zheng Shuang were popular with the other gender while in school. Yang Yang was widely known as one of the best-looking students at the People’s Liberation Army Academy of Art, and many female students were fond of saying they had spent the whole day looking at him. On the other hand, Zheng Shuang shared that if she had received a love letter in school, she would have “gotten scared and told the teacher.”

During the news conference, Zheng Shuang was asked if she had gained weight, as her face seemed fuller although her body was still slender. She responded, “The important thing is not weight, but health” and added that she has passed the stage of extreme thinness.

Yang Yang’s body has also received focus from fans, who will be fortunate enough to see him swim in Love O2O. To prepare for the scene, Yang Yang ate vegetables and egg whites for one to two months and refrained from all oily foods. Upon returning home, he would work out for two hours. “Sometimes I would work out until one or two in the morning and still have to wake up early to film,” he shared.

Yang Yang and Zheng Shuang previously worked together in the reality show Divas Hit the Road <花兒與少年>, in which they portrayed brother and sister. The story of Love O2O has also been adapted into a movie starring Jing Boran (井柏然) and Angelababy (楊穎), which opened in theaters on August 12.

“A Smile is Beautiful” Trailer