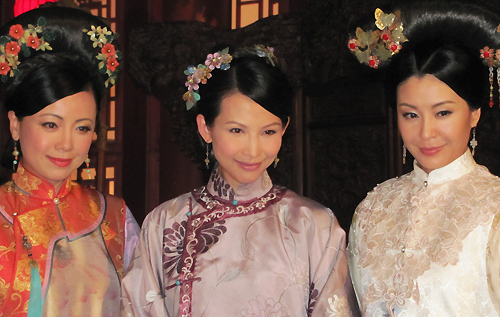 War and Beauty, a Qing Dynasty palace drama that is set during the reign of Emperor Jiaqing, was a major hit in 2004, setting ratings records in Hong Kong. The serial was also critically acclaimed, with its cast winning best acting awards and the drama itself becoming Drama of the Year. War and Beauty was also known for resetting the careers of the main leads back to prominence.

The two-part War and Beauty series is a product of producer Jonathan Chik (戚其義) and scriptwriter Chow Yuk Ming (周旭明), both who have left TVB to start their production company in 2012. According to various reports, Jonathan and Chow’s exit played a major factor in TVB’s decision to pull Beauty at War out from the original anniversary drama time slot into a pre-summer time slot. Sheren Tang and Ada Choi’s decision to leave TVB also allegedly impacted the decision as well.

Jealous of her sister’s strong influence in harem affairs, Consort Dowager Shun (Christine Ng) spreads false and negatives rumors about her elder sister, Consort Yu (Sheren Tang), in the Forbidden City. The ambitious wet nurse, Sheung Ling (Ada Choi) uses this chance to investigate the truth behind the rumors for monetary benefits. The opportunity leads Sheung Ling to become Yu’s personal maid; she develops a close relationship with her master.

Soon afterwards, a famous opera troupe headed by Ko Lau Fei (Moses Chan) and Wan Chau Yuen (Eddie Kwan 關禮傑) is invited to the Forbidden City to perform. The charismatic Ko Lau Fei evokes emotion in the cunning and lonely Shun, and she falls in love with him. To maintain the chastity of the palace harem, Yu tries to prevent Shun from seeing Fei. However, Yu is also falling under Fei’s love spells, and gets involved in an inexplicable love triangle with Fei and Sheung Ling.

Shun decides to return the favor by recruiting the diviner and ex-prisoner Tung Kat Hoi (Kenny Wong) to destroy her sister. In the eyes of an outsider, Hoi appears to be a madman, but for those who reside deep inside the Forbidden City, Hoi is the only sane being.

15 comments to “Beauty at War” Synopsis