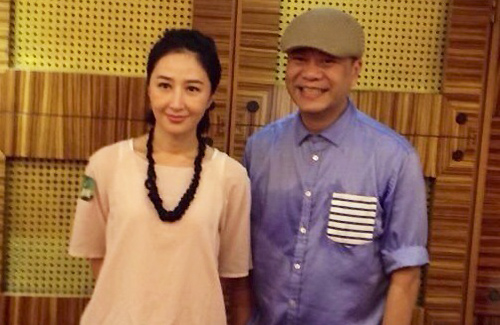 Bobby Au Yeung (歐陽震華) and Esther Kwan (關詠荷) continue to promote Always and Ever <情逆三世緣> this week, spending a warm afternoon with viewers in Tsim Sha Tsui on August 27. The cast of the fantasy drama greeted the public from an open-top tour bus as they circled the busy shopping district. Later they passed out gifts and snacks to the crowd and rallied for their support.

Many artists were soaked in sweat due to the humid heat. Bobby cleverly turned an uncomfortable situation into an opportunity. He commented that TVB should consider sending the cast to the beach for their next promotional activity because they will feel more comfortable in swimwear. When reporters implied that he is scheming to see his female colleagues in revealing outfits, Bobby replied that he wants to see the entire cast in swimsuits. He is even willing to wear one himself to boost ratings. While filming File of Justice <壹號皇庭>, Bobby purchased a one-piece swimwear for a scene in which he performed CPR to Joyce Koi (蓋鳴暉). He has kept the swimsuit since and offered to wear it to generate noise for Always and Ever. “I will even add padding! I will expose as much [of myself] as I can.”

When asked to comment about Bobby’s proposed beach event, Esther joked that she will start a new trend by wearing a t-shirt underneath the swimsuit. She shared that her daughter Brittany (張童) has been closely following the drama, and is constantly asking questions about the plot. Brittany also enjoyed watching Bobby on screen, finding his goofy expressions cute.

The two stars took the opportunity to clear up recent rumors at the event. Regarding earlier reports that he has purchased a new home, Bobby clarified that he and his wife have temporarily moved out of their current residence because of renovations. Esther also denied reports that her marriage with Nick Cheung (張家輝) is in trouble, saying that she does not know how to comment on false news.