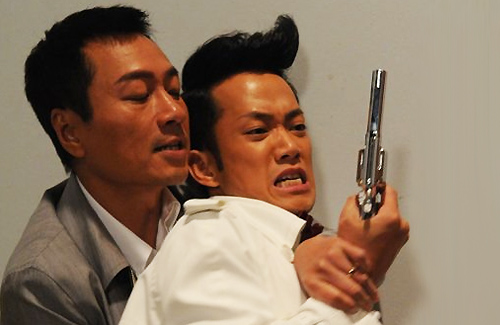 Bullet Brain’s <神探高倫布> faulty plot will become even more twisted as the series approaches its grand finale this Friday, May 10. The fantasy-like drama received many viewer complaints over its illogical and inaccurate story lines, even dubbed by netizens as a “plastic” drama. With just three episodes remaining, bizarre tactics will be used to wrap up loose ends.

In a rush to conclude the story, several supporting characters were killed off successively in tonight’s episode. Pao Ping On (Ngo Ka Nin’s 敖嘉年) wife Joanna Rose (Corinna Chamberlain 陳明恩), who returned to England after becoming pregnant, died shortly after the episode began. Joanna planned to return to Hong Kong to reunite with Ping On. The flight experienced severe turbulence and Joanna was thrown about in the cabin. She then suffered a heart attack and was taken to the hospital where she died after seeing her husband one last time.

Eva (Sire Ma 馬賽), who is currently in England, was notified of Joanna’s passing and immediately went to inform her father, Louis Kim (Joe Junior). After failed attempts at waking him, Eva realized that Louis has passed away in his sleep, quickly ending his story.

The final death in this episode was Mui Mui (Natalie Tong 唐詩詠). Charged with murder after dismembering and cooking a former lover, Mui Mui was finally sentenced to death by hanging. Columbo (Wayne Lai (黎耀祥) was able to see her before the execution. He presented a wedding ring to her to declare his love, and braided her hair as she had wished. Although the scene was touching and a moving tribute to Mui Mui’s tragic life, some complained it lasted too long and had too much dialogue.

In the preview for the next episode, Mui Mui seems to return as the undead, leaving viewers to ponder its implications. To add to the confusion, Columbo appeared as an Indian, sitting on a plane with a turban and darkened skin.

With unexpectedly low ratings and poor audience reception, this Friday’s finale will wrap up TVB’s disappointing attempt at filming in a new format. While cast members were initially enthusiastic about the new filming techniques, many now admit to the series’ failures. Whether the company will continue to diverge into unknown territories or adhere with its more traditional formats remains to be seen.