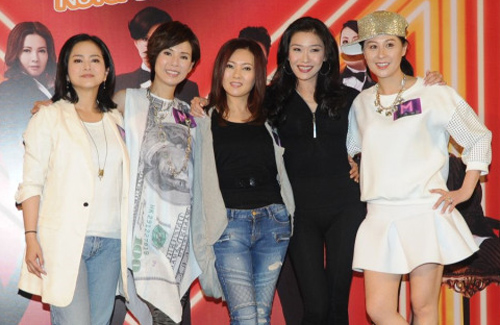 The cast of upcoming drama Never Dance Alone <女人俱樂部> promoted their series with an uplifting aerobic dance session on April 8. As the series focuses on nostalgic memories of middle-aged women, over a hundred housewives were invited to the event and were asked to dance along with the stars of the show.

Even though it has been nearly a decade since some of these nineties goddesses have greeted the public, many have retained their youthful and natural looks. Carman Lee (李若彤) in particular was praised by the media for successfully maintaining her looks and physique. Best known for her role as Siu Long Lui in 1995’s version of The Return of Condor Heroes <神鵰俠侶>, the 40-year-old seems to share her character’s everlasting beauty. When asked about her secret, Carman reveals that she exercises regularly in order to maintain a healthy and toned body. Despite the praises and admiration, she expressed concerns over partnering up once again with her Condor Heroes co-star Louis Koo (古天樂), joking that she would look like an older sister next to Louis’s eternal baby face.

Rachel Lee (李麗珍) also maintained her slim legs and curvy figure despite spending much of the past decade raising her teenage daughter. She shared that she had agreed to film Never Dance Alone because her daughter, who is now studying in Canada, had asked her to participate so that she would not feel lonely living in Hong Kong. Although the shooting process was tiring, Rachel admits that life seems to feel emptier now that filming has completed.

Angie Cheong (張慧儀), who runs a Mainland health food business, said that it has been difficult to fit filming into her busy schedule. She however would consider returning to the screen if there is a suitable script. Although she is single at 43, Angie is in no rush to find her other half. Focused mostly on her business and her adopted son who suffers from a heart condition, she leaves her love life to fate and only hopes to meet a man who can also fully accept her son.