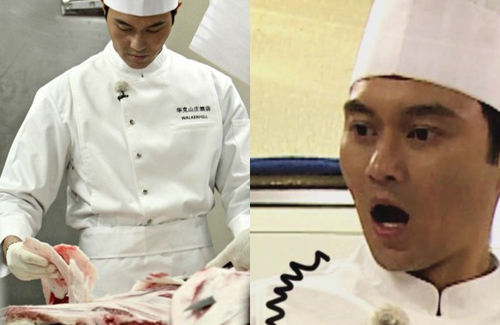 In an episode preview, the three couples were forced to work odd jobs in order to make a living. Chilam and Anita, who are known to be obsessively clean, were assigned to work in the kitchen of a hotel restaurant, where they witnessed the dividing of a large piece of pork. The couple not only looked stunned and horrified, but also shrieked in terror at the bloody scene. In a daze, Chilam was seen to quietly mouth, “So brutal. So hellish!” When the head chef assigned the couple their main challenge of the day, Anita cried and even began begging for mercy in Korean.

The other two couples were put in unpleasant situations as well. Tian Liang and Ye Yiqian were forced to carry heavy and dirty coal, while He Zemin and He Jie worked at a car wash. In the preview, audiences witnessed He Jie crying aloud, but are left pondering why.

After a long and tedious day of work, the three couples returned to accept and undertake Kim Heechul’s final task. Although the preview did not show what the final mission was, the couples were seen to kiss lovingly, while an awkward Kim Heechul was left staring with his jaw dropped.