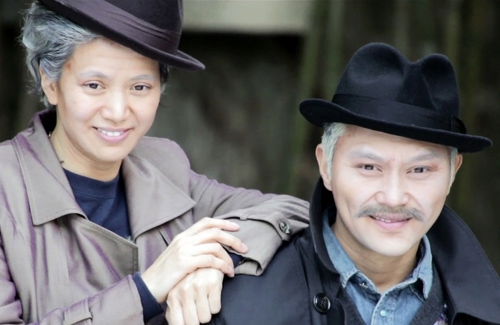 Chilam Cheung (張智霖) and Anita Yuen (袁詠儀) maintain a loving marriage, and will bring their chemistry onscreen in the upcoming Korean-inspired reality show, There’s You on This Road <一路上有你>. Along with Chinese celebrity couples, Tian Liang (田亮) and Ye Yiqian (葉一茜), as well as He Zemin (赫子銘) and He Jie (何潔), they will accept various challenges while traveling around South Korea.

Since he has never visited Korea before, Chilam was full of praises towards the fun local sights. “It was an eye-opening experience. Most importantly, I was able to spend time and go dating with my wife.”

To appeal to the masses, the show’s production team arranged for the couples to meet many Korean idols, including Kim Hee Sun and her husband, Super Junior member Kim Heechul, as well as Chinese EXO member Huang Zitao.

For one of the challenges on the show, Chilam and Anita transformed into an endearing elderly couple with the help of makeup. While filming the segment, the couple was seen to be crying in succession. Shocked by the sight, reporters questioned Chilam, who revealed that it was part of a challenge. “I cried harder than she did! This is actually one of the challenges on the show. When I saw her old lady appearance, I didn’t expect to react that way. The producers arranged for us to prepare a 30-year time capsule speech for our significant others.”

When asked what Chilam had said to make his wife cry, Chilam teasingly asked the audience to watch the show and find out on their own.

There’s You on This Road released previews in its theme music video yesterday, which showcased the celebrity couples recording the theme song and enjoying the sights of South Korea.

“There’s You on This Road” Theme Song