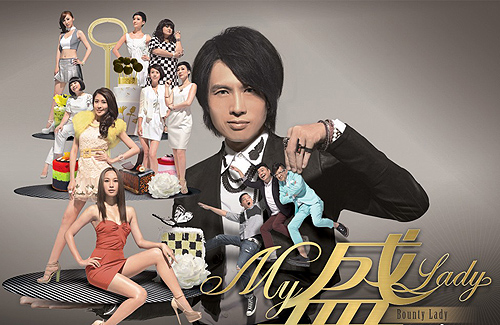 Stand-up comedian and actor, Dayo Wong (黃子華), is back with another TVB comedy drama. It has been a little over four years since the War of the Genders <男親女愛> star has last starred in a TVB production, as his last drama, You’re Hired <絕代商驕>, was one of the most popular and highly-discussed television dramas of 2009.

Dayo’s comeback drama, Bounty Lady <My盛Lady>, is produced by Man Wai Hung (文偉鴻), who closely collaborated with Dayo in You’re Hired. As most of Dayo’s dramas in the past were critically acclaimed for its witty humor, My Bounty Lady immediately earned the chance to grace TV screens less than four months after principal photography ended this July. TVB is eager to see a rise in their TV ratings again and may even nominate My Bounty Lady at this year’s TVB Awards Presentation.

Golden public relations genius Heung Kwong Nam (Dayo Wong) is popular with the girls, but not for his looks. Though he is known for his successful efforts in helping single ladies find their Mr. Rights, Kwong Nam himself is single, and he would rather pursue short-term relationships rather than be tied up long term. His new boss Shing Fa Lui (Kate Tsui 徐子珊) mistakes Kwong Nam to be a party boy, believing that he is only using his job as an excuse to get closer to women.

Kwong Nam cannot care less about their hate and continues to do whatever he wants, that is, until his ex-girlfriend surfaces into his life once again, and Kwong Nam’s life is turned around dramatically.