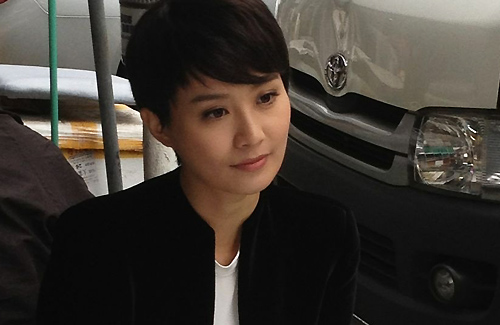 Many artists have to consistently work out and exercise to keep a well-presented figure and healthy figure, but Fala Chen’s (陳法拉) curves are all natural.

Wayne expressed that he had taken three years of karate lessons before, so the training kicks were not a challenge for him. Fala, however, had difficulty following the instructor’s steps, and in the end suffered bruises all over her legs and arms.

“I do not know how boxing works at all. We did not have an instructor to teach us on set, so I had to rely on watching the instructor who was teaching a class in the same studio. I rarely exercise too, so I really had to depend on my luck for this scene. Wayne and I had discussed how to do the scene thoroughly. Wayne is really smart. He knows how to protect himself from getting hurt, but I don’t know how, so that’s why I am all bruised.”

Fala, a previous beauty pageant titleholder, is often praised for her good looks, healthy skin, and attractive body shape. Fala admitted that a large part of her good figure came from her family genes, rather than through a consistent workout regimen.

“I do not jog nor swim. First off, I don’t have the time to, and second off, it is inconvenient for me to do so at public places. The only things I do are simple stretching exercises at home. I also have to eat a lot before I work!  I would not be able to function properly after a long and hard day of work if I didn’t eat.”

Fala revealed that Wayne and Moses are currently trying to keep a simple, vegetative diet to maintain their lithe figure for the drama. “If they’re not eating fruit then they are eating congee, or boiled foods. It does stress me out a little, because it makes me wonder if I should eat less too! When they see me eat, they would tell me to eat farther way so they wouldn’t be seduced by my food! It is quite hilarious!”

Muay Thai boxing scenes are common recurrences in TVB dramas. Wayne’s colleagues, Moses and Kevin Cheng (鄭嘉穎), have portrayed professional boxing champions before, and went topless for their roles to expose their toned muscles and abs.  Wayne however, chose to stick with a sleeveless top.

“There will only be about two boxing scenes in the drama. I did not train. If you were to ask me, I would not mind filming a drama that is similar to Gloves Come Off <拳王>, a drama with an excuse to show off your muscles! I would like to have the audience see a different side of me! Better off next time!”