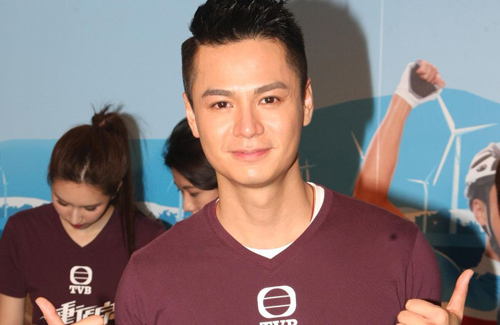 Him Law (羅仲謙) and Sisley Choi (蔡思貝) promoted for new TVB drama, Young Charioteers <衝線> at a fitness center. As this is the Him’s first TVB series as the main male lead, he especially took a break from filming The Monkey King 2 <西遊記之孫悟空三打白骨精> to attend the promotional activities.

Him indicated that he had many scenes opposite of Aaron Kwok (郭富城) and Gong Li (鞏俐) in The Monkey King 2. When teased whether he felt the intense screen presence of Gong Li, Him smiled and said, “Absolutely felt it. If it were a few years earlier, I would have been weak-kneed. Luckily, I have had some experience in the filming industry the past couple of years, so I was calmer.”

Him’s girlfriend, Tavia Yeung (楊怡), previously indicated that she may visit Him on set of filming The Monkey King 2. Him smiled and said, “Then invite her to come for a tour. Other than sightseeing, I can also introduce her to Aaron and Gong Li.” When teased whether he will also mention their relationship status, Him smiled and said he will worry about it when it happens.

During the yoga activity, Sisley got too excited and accidentally exposed herself. Because of her background in dancing, Sisley was extremely engaged in the activities. Due to the big movements, Sisley accidentally revealed herself and did not even realize it.

Sisley said Anthony Wong (黃秋生) had once teased that she was as flexible as a snake. “Anthony gave me a lot of encouragement and is a good teacher. Anything that I did not understand, I could ask him. For example, if I had any struggles with filming, I would ask for his opinion.”