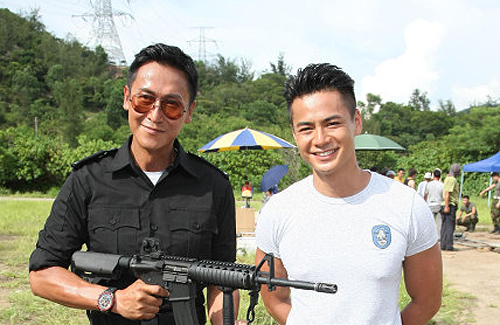 Despite humid weather, the cast filmed a SDU training scene and was doing push ups with props on their backs. None of the actors complained even though most of them were sweating from the training, and their only source of cooling down was to drink a lot of water. Being the sole female in the scene, Mandy put ice packets in her clothes to keep cool in preparation for the hot weather. And many noticed that even with a uniform, Mandy’s figure still managed to stand out.

Joe advised that everyone must take care of their health while filming to avoid accidents. Filming in a swimming pool earlier, Linda had voiced her fear of water scenes. Joe said, “Don’t worry, I’m CPR certified and I have a diving license! We’re also going to spend time performing water inspections and such, so it should be fine.”

When reporters asked if Him has grown more muscular since Tiger Cubs, Him causally replied, “I’m definitely not as macho as Nick Cheung (張家輝) now! I have trouble changing my eating habits because food is just too tempting.” Asked if rumored girlfriend, Tavia Yeung (楊怡), is heartbroken that Him has to work long hours in the sun, Him awkwardly replied that the fighting scenes in the series are more worrisome than actual training.

Oscar is Proud of His Abs

With a shorter build, Oscar knows he is not as muscular as Joe and the rest of the SDU members. Oscar is satisfied with his upper body, but needs to continue working on the lower abdomen portion to be in better shape. Asked about TVB editing out the negative comments during his singing portion with Mandy on Voice of Stars <星夢傳奇>, Oscar said he is unsure of the editing process. Since it took 14 years for him to gain recognition as an artist, he will continue to work harder regardless of obstacles.

Mandy also said she did not mind if the criticism portion was broadcast or not, and felt that the judges gave valuable advice on how to further improve. As well, she is unsure about TVB’s editing process.