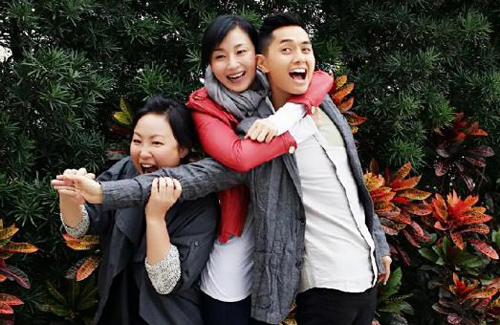 Since Joey Meng (萬綺雯) will be playing a policewoman in the new series, Ox Head Loves Horse Mouth <牛頭愛搭馬嘴>, she has been training intensively with the action choreographer to prepare physically for the role.

Joey already learned how to properly hold a gun, specific knock down and reverse locking techniques when catching thieves. In the drama, Joey often “knocks down” her siblings when she returns home. Fred Cheng (鄭俊弘) and Harriet Yeung (楊詩敏), who play Joey’s siblings also attended the training sessions. In order to familiarize with each other, as this is the first time the three will be collaborating, producer Cheung Kin Man (張乾文) pit them against each other in a friendly fight.

Joey, Fred, and Harriet took turns doing handstands and cartwheels to warm up their muscles. And in one warm up fight, Fred’s head was locked in between Joey’s scissor legs, and when asked if he is scared that someone might get hurt, Fred said the experience were very fun and entertaining.

With a martial arts background, Fred quickly picked up the moves and Joey felt relieved that Fred will be able to remember most of their moves. Joey injured herself earlier in several action scenes while filming Ox Head Loves Horse Mouth because she did not know how to utilize her muscles in some of the action stunts.

Since his popularity soared from winning The Voice: Stars’ Legend <星夢傳奇>, Fred will be busy with shooting dramas and preparing for his new album. Fred said, “It’s okay right now. I’m used to filming dramas on a tight schedule. The plan right now is to release an album in either May or June, so time wise, it’s workable. I want to be able to manage both workloads.”