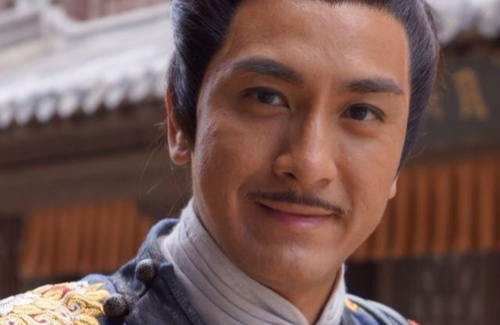 Although his current drama Triumph in the Skies 2 <衝上雲霄II> is ending its run this week, Kenneth Ma (馬國明) has no time to celebrate. Currently filming martial arts series Cold Mountain, Hidden Dragon <寒山潛龍>, Kenneth is putting all of his focus on the grueling fight scenes and is keeping his spirits up despite sustaining several on-set injuries.

Earlier, Kenneth was spotted filming outdoor action sequences for the upcoming drama. Due to the unpredictable weather in recent months, filming was repeatedly delayed and the production team is now behind schedule. As a result, the team took advantage of any and all sunny days to shoot, even in the harsh humid heat. Wearing three heavy layers, Kenneth was sweating profusely while on-set though he did not complain.

In a scene, Kenneth, who plays constable Chu Cheung Sing, was instructed to run along a mountain to chase after a thief. At one point, Kenneth threw himself towards his target but the thief escaped capture. Kenneth fell onto the rocky ground, landing on his hands. He repeated this scene a few more times, scraping his right hand and injuring his wrists. Kenneth also reportedly strained his calves earlier while performing a kick.

At a recent promotional event for Triumph in the Skies 2, reporters noticed the injuries and asked Kenneth where they came from. Kenneth explained, “I was injured while filming ‘Cold Mountain‘! It is minor, so no worries!” When asked if he has completed his action scenes, Kenneth said, “Of course not. We will go to Xiangshan later to continue filming. The director scheduled many fighting scenes to film while on location. It really will be pure fighting!”

Since Kenneth rarely films action series, he finds this filming experience rather challenging. “I don’t have a martial arts background, so it has been tough performing fight scenes. Earlier I lost 8 pounds just from filming in extreme heat while in costume. Adding all the running and fighting that I will have to do this time, I will probably become super fit!” Despite the uncomfortable conditions, Kenneth remains optimistic and keeps an important goal in mind: “It is very tiring this time around, but it’s okay! If the scenes turn out well and viewers love them then anything is worthwhile!”

This year, TVB plans to debut Kenneth’s other anticipated series The Hippocratic Crush 2 <On Call 36小時II> on October 14 as an anniversary month. As the series’ popular male lead Cheung Yat Kin, Kenneth has a good chance to nab a Best Actor nomination at this year’s TVB Anniversary Awards. When asked for his thoughts, Kenneth said, “I’d like to thank my company for thinking so highly of me. Having the chance to get a nomination already makes me feel like I have won, so it isn’t a big deal. Of course it would be even better if I win; I can ask for a higher price!”