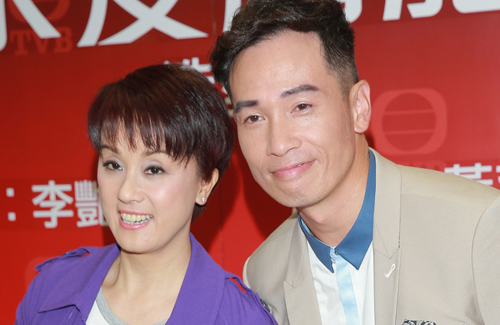 Despite having a young son, Moses Chan (陳豪) is away from home working non-stop to provide for his family. On June 24, he attended the costume fitting for his latest drama Opera Rouge <水髮胭脂>, which re-unites him with co-star Joyce Koi (蓋鳴暉) twelve years after their last collaboration in 2003’s Better Halves <金牌冰人>.

The sales presentation trailer of the modern romantic comedy originally starred Wayne Lai (黎耀祥), but the role was ultimately given to Moses. Some speculated that Moses was forced to film this series after his wife Aimee Chan (陳茵媺) decided to take an indefinite hiatus and angered TVB executives. Moses denied these gossips, clarifying that the casting change was due only to a schedule conflict. “[Wayne] is off to film with Anthony Wong (黃秋生)! I am pretty blessed, since all actors need jobs!”

Speaking about Aimee’s “mother’s wrist”, a condition characterized by inflammation and pain around tendons that connect to the thumbs, Moses shared that she is currently undergoing physical therapy and is being extra cautious when holding their baby. Although Aimee is taking a year-long break to care for her son, Moses assured that she is still passionate about acting and that he would be supportive whenever she decides to return to the TV screen.

Joyce Koi, a well-known Cantonese Opera singer, is excited to star in the drama alongside veterans Louise Lee (李司棋) and Law Lok Lam (羅樂林). She is also happy to collaborate with Moses once again; the two will be romantically linked in the series. Since the story involves Cantonese Opera, Joyce feels that the plot is similar to her own life and is planning to wear her personal opera costumes on the set.

Katy Kung (龔嘉欣)  joins the cast as Louise Lee’s daughter, and will share a romantic story line with Jason Chan (陳智燊). She recently dislocated her shoulder joint due to her sleeping position, and kept her right arm extra stiff at the event. Luckily, good friend and roommate Elaine Yiu (姚子羚) is there to bandage her arm and assist with her daily needs, allowing Katy peace of mind as she recovers.