No Intimate Scenes for the Leads in “Will Power” 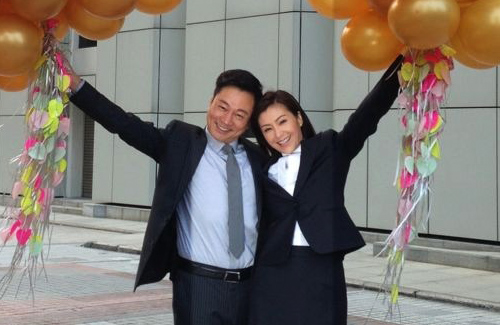 There will be no intimate kissing scenes for the four lead actors and actresses in TVB’s upcoming legal drama, Will Power <傳愛事務所>. Wayne Lai (黎耀祥), Moses Chan (陳豪), Christine Ng (伍詠薇), and Fala Chen (陳法拉) can now save their breaths on trying to explain their day’s work to their spouses and partners tonight!

Will Power is a comedy-drama serial produced by War of the Genders <男親女愛> producer, Tsui Ching Hong(徐正康), who returned to TVB last year after six years of absence. Leading the legal drama is Wayne Lai and Moses Chan, two buddy barristers that specialize in battling large inheritance cases. In the drama, Wayne will be pursuing his ex-wife, a civil judge, portrayed by Christine Ng.

Christine was actually the third choice to portray the role. First choice, Maggie Shiu (邵美琪), turned down the role for unknown reasons, but it was rumored that Maggie was not satisfied with how TVB handled her role, Empress Ci’an, in last year’s Anniversary drama, The Confidant <大太監>. Sonija Kwok (郭羨妮), the second choice, turned down the role because she was too busy filming The Day of Days <初五啟市錄> at the time.

Earlier, the paparazzi spotted the main leads filming a heartwarming scene by a fruit stand in Yau Ma Tei. Instead of kissing each other on the lips, the couples hugged tightly and kissed each other on the hand.

The married Wayne explained, “The scene is about me chasing back my ex-wife (Christine), who is a judge. She has accepted me, which is why we were holding hands. Intimate scenes? The producer did not arrange for one, and I rarely [get the chance] to film those scenes as well.”

Since 1997, Wayne has been married to his wife Julia Leung (梁耀蓮), who later became his manager. The couple has one 15-year-old son. Christine is married to Kasey Lin (練海棠), a well known advertising executive.

Will Power’s next leading couple, Moses and Fala, also does not share many intimate interactions with each other. The scene being filmed only required Moses to kiss Fala’s hand like a gentleman greeting a lady. During the breaks in between takes, Moses also appeared very nervous and clumsy. Moses’ current girlfriend, Aimee Chan (陳茵媺), and Fala’s rumored husband, Sit Sai Hang (薛世恒), can now let out a sigh of relief!

Years ago, Fala made it clear to TVB that she will not film scenes that require her to intensely make-out with her costars. Maybe her brief lip-lock with Michael Tse (謝天華) in Lives of Omission <潛行狙擊> was her limit?

Will Power’s producer Tsui said, “Recently everyone is talking about ‘heavy flavor.’ I am not a big fan of this style. Hugging and kissing are not requirements for romantic scenes, and there are many other ways to express love. However, I must stress that the lack of intimate scenes [in Will Power] is not because I’ve yielded to my lead actors.”

The lead actors of Will Power may not be able to get a taste of heavy flavor, but supporting actress, Sire Ma (馬賽), definitely will. In the show, she will get raped by Vincent Wong (王浩信), who portrays Fala’s ex-boyfriend. Sire will also be paired up with rising star, Jason Chan (陳智燊).

Source: Next Magazine #1196 via ihktv.com