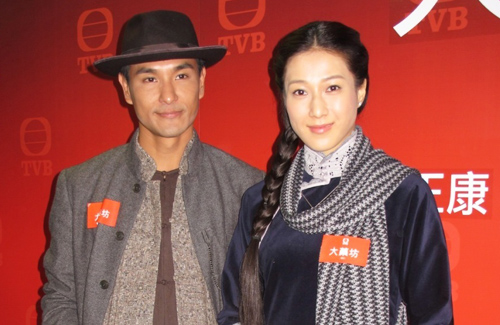 Portraying the first female doctor in China, Linda said that she will have to spend extra time memorizing the script due to the jargon of Chinese medicinal herbs. At today’s costume fitting, when she was once again teased about her romantic rumors with Ruco, Linda laughed embarrassingly, “Please don’t be unfair to Ruco and insist that he [pursued me]!”

Ruco grew to understand Linda’s personality during the several months spent together filming Brother’s Keeper. He maintains that they cannot be more than friends. To avoid further misunderstandings, Ruco joked, “This time I will not be as immersed [in the character’s love emotions]!”

Big Apothercary will also mark Shirley Yeung’s return to acting in dramas. Hosting various variety programs for the last four years, Shirley suffered a slew of negative rumors when she gave birth to daughter Krystal out of wedlock in March 2012. Although she portrays a married woman who seduces Ngo Ka Nin in the drama, Shirley is not concerned about overly revealing scenes due to the restrictions of television dramas.