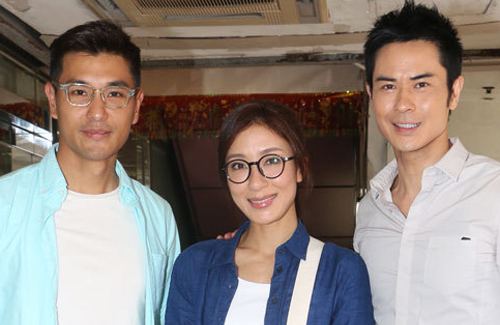 Male leads who worked with Tavia Yeung (楊怡) have not been feeling so lucky recently. Steven Ma (馬浚偉), Tavia’s costar in Storm in a Cocoon <守業者>, injured his eye and nose while performing a stunt for the TVB drama, and Kevin Cheng (鄭嘉穎), currently filming Eye in the Sky <天眼> with Tavia, had to postpone filming after he aggravated a torn ligament in his foot.

Tavia’s Eye in the Sky costar Ruco Chan (陳展鵬) attended a World Cup event yesterday with Adrian Wong (黃芷晴). Ruco regrettably said that due to work, he does not have much time to watch the World Cup, but will check out the games’ results when he is on break.

Asked if he was affected by Tavia’s so-called curse, he said with a laugh, “We had a blessing ceremony so we hope we’re blessed with safety. I don’t have much action scenes, but Kevin does. With big brother Kevin shielding us from the curse, I don’t think Tavia can get to me!”

Adrian said her father, Felix Wong (黃日華), is an avid fan of football and is also part of the Hong Kong’s All Star Football Team. She said she did not inherit her father’s talent in football and appeared clumsy when she tried to show off a football move.

“Wednesday is the big day for my father and his friends to play football. No one should bother him in those days. Usually, he likes to watch [football] games in my room. I usually watch the World Cup so we can have something to talk about!” Adrian also said that her boyfriend will be watching the World Cup opening ceremony with her father. “I think Father’s Day will also be spent with football.”