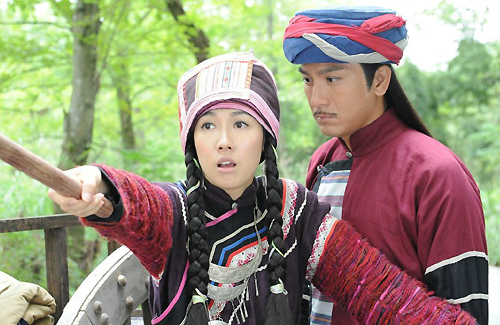 Ghost Dragon of Cold Mountain <寒山潛龍>, which began airing on June 30, stars Kenneth Ma (馬國明), Power Chan (陳國邦), Ngo Ka Nin (敖嘉年), and Lin Xiawei (林夏薇) as four constables who work together to solve crimes. The drama is at first comedic and lighthearted, but towards the end of the series, its characters will be involved in a major revenge plot.

As the series’ main protagonist and lead character, Kenneth has a lot of weight to hold on his shoulders, but producer Marco Law (羅永賢) is confident in Kenneth’s performance, “Kenneth’s image is well-accepted by the public, but not too strong and powerful. He portrays a good man this time, and the character suits him really well. This drama will be about solving crimes first, but it will slowly develop into a political drama. I hope the audience will enjoy it.”

Portraying Kenneth’s wife in Ghost Dragon of Cold Mountain, Selena Li (李詩韻) worked with Kenneth for the fifth time. “They don’t have a lot of intimate scenes in the drama because they are portraying a married couple of over ten years. However, once they come together on camera, chemistry immediately sparks,” said the producer.

Selena portrays two characters – one as Kenneth’s wife, the village housewife, while another is a beautiful and famous courtesan. The latter role not only seduces Kenneth, but also becomes one of the series’ main villains.

It was a challenge for Selena to portray two completely different roles. The village housewife is patient, loving, and kind, while the courtesan is materialistic and hungry for money. “She will do anything for money,” said the producer. “She has a very complicated background and is a very ruthless killer. We tried to make these two roles as different as possible. It was challenge, but Selena grasped them very well. These roles give the series’ more tension.”

Lin Xiawei, a graduate of the Beijing Central Academy of Drama, had plenty of theater acting experiences prior to joining TVB in 2010, but  she came across a new challenge in Ghost Dragon of Cold Mountain. Xiawei’s role, the only female constable in the agency, was originally meant for Aimee Chan (陳茵媺), but Aimee had to withdraw from the cast due to her pregnancy at the time. Xiawei did not have ample time to study the role, but she managed to earn the praises of the producer and directors.

Ghost Dragon of Cold Mountain is Xiawei’s first wuxia drama. She finds the series’ refreshing and enjoyed filming the action scenes. “I have many odd appearances in the show. Besides cross dressing, there is also a part where I go undercover as a prostitute,” said Xiawei.

Possessing youthful looks far beyond his real age, Raymond Cho (曹永廉) portrays Kenneth’s best friend, a lazy and indolent stooge. Marco Law exclaimed that the role is perfect for Raymond, who is just as superficial as his character. He laughed, “I always tell him that he always comes off as somewhat of a fool. We’ve collaborated over ten times so I know what Raymond can do. This role is perfect for him! I told him to just be himself, and he gave a fabulous performance.”