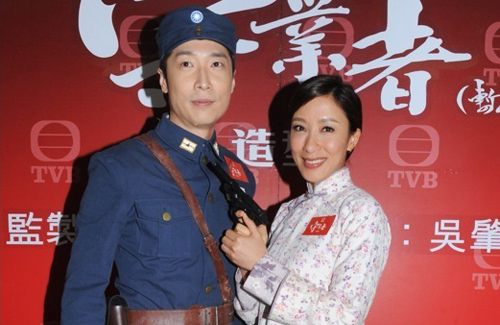 TVB made a lot of accommodations in order to secure Steven’s return, offering a higher salary and even allowed Steven to offer input on the main cast. While Steven was able to work together with good friend Tavia, Bobby Au Yeung (歐陽震華) was forced to decline the opportunity due to his poor health since February’s hospitalization. To salvage the series, TVB appointed Evergreen Mak to take on Bobby’s role and rewrote the modern story into a period tale.

Tabloids reported that Steven was disappointed with this change and implied that Evergreen was not good enough to participate in this series. At the costume fitting, Steven denied the gossip and insisted that he and Evergreen are close friends. Evergreen also described this rumor as “crazy” and defended his friendship with Steven. “We have a really good relationship, always calling each other ‘Second Brother’ and ‘Third Brother’. No one can drive a wedge between us.”

Speaking to reporters, Steven stated that he is thrilled to be working with director Leung Choi Yuen (梁材遠). He shared that he had already promised mentor Catherine Tsang (曾勵珍) last year that he will film this series. Steven also mentioned that Catherine  discussed the possibility of filming a new season for his Apprentice Chef <大廚出馬> series, but that may not happen until next year due to his current busy schedule. Steven also revealed that he has yet to officially sign the contract with TVB since his lawyer is currently away from Hong Kong. He is however confident in TVB and has no problems with filming before the paperwork is finalized.

Aside from Property Protector, Steven is busy preparing for his new album, scheduled to be released at the end of June. He also plans to hold a mini concert in July, hoping to donate profits to charities. Steven, who made his debut as a singer, is very excited about the upcoming concert. “I’ve sang for so many years, but this will be my very first concert. I really love singing and will continue to sing for as long as I can.”

Tavia’s Relationship With Him is Still Strong

Tavia was asked about Him Law (羅仲謙) and Eliza Sam’s (岑麗香) romantic rumors on the set of The Hippocratic Crush 2 <On Call 36小時>. Did Tavia and Him’s romance come to a sudden end?  Tavia replied, “I only know about the sudden [urge] to go to the bathroom. What does it mean that the romance came to a sudden end? That’s nonsense.” Did Tavia trust Him a lot? Tavia said, “He is a person who deserves to be trusted. I am also good friends with Eliza.”