The Lawyers of “Awfully Lawful” Work Hard and Play Hard 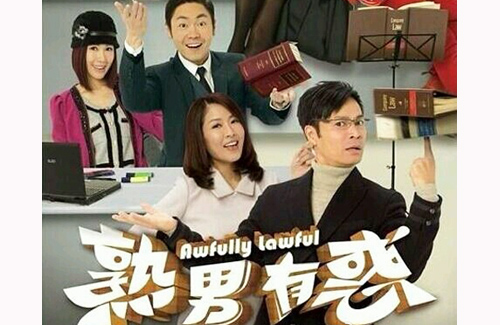 Portrayed by Roger Kwok, Solo is a self-centered, stubborn, and beguiling lawyer who tends to cross extreme boundaries to win a court case. He denounces any type of networking benefits and prefers to work alone. Whenever a girlfriend mentions having a possible future with him, Solo panics and breaks up with her.

The independent Solo, however, has his unshaken beliefs questioned when he meets law intern Kate (Sharon Chan 陳敏之), a single mother. Solo is in love, but he is not sure if he is ready to start a family.

Portrayed by Johnson Lee, Fish is a sickly village boy who snags a rich wife Elsa (Selena Li 李詩韻). Fish has an impressive talent with languages and is able to communicate with people from all corners of the culturally vibrant Hong Kong. Fish wants to be a father, and tries to come up with excuses to get Elsa to bed. Although Elsa cherishes her husband, she fears that her husband would commit infidelity.

Portrayed by Pal Sinn, Jazz is a competent solicitor, but truly wishes for a career in entertainment. He has a specialty at winning in lawsuits that deal with divorce or other litigation involving relationships. He is attracted to the sexy Yau Mat (Grace Wong 王君馨), but the physically compatible couple have quite different personalities.

The boss of Shing Lam Law Firms, Ming Sir is portrayed by Raymond Cho. Unlike his three best friends, Ming Sir has a family supported by his loving wife Koo Ka Ting (Joyce Tang 滕麗名) and a young son. Ming Sir is honest, caring, and is devoted to his family. He is gifted with the talent of photographic memory and has a knack at winning in lawsuits dealing with business concerns and operations.

The mature Ming Sir is the base and voice of the group, but when he suddenly goes missing, the core that brings the best friends together also disappears.

Produced at 20 episodes, Awfully Lawful is set to premiere on June 17.