“Beauty At War” is a Love Letter to Fans 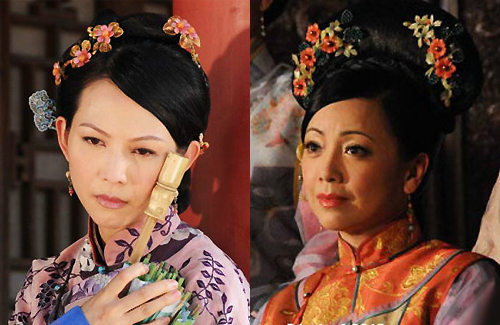 Palace drama Beauty at War <金枝慾孽(貳)> will finally premiere next Monday, April 22! The sequel to 2004’s critically successful War and Beauty <金枝慾孽> sees the return of Sheren Tang (鄧萃雯) as Consort Yu, and will introduce a cast of new characters to spin a brand new tale of the Qing Dynasty imperial harem.

Although Consort Yu re-appears in the sequel, she will be portrayed differently than in the first series. In Beauty At War, Consort Yu and Consort Dowager Shun (Christine Ng 伍詠薇) are blood sisters who entered the palace at the same time. Yu fell ill prior to consort selection and as a result, Shun was chosen instead. Unfortunately for Consort Shun, the emperor soon passed away, leaving her a widow. After the new emperor took his throne, he welcomed Yu into his harem and granted her a blessed life.

Shun becomes angry when she heard the news, and believes Yu had faked her illness to escape a lesser fate. Filled with hatred, Shun takes her revenge by spreading many false rumors about her sister.

From Shun’s many rumors came the story of War and Beauty. It was recently revealed that the events in War and Beauty actually took place inside a parallel universe fabricated entirely by Shun. The current series will take place in the true reality, and viewers will be able to discover what really happened outside of Shun’s delusions.

Beauty at War will also emphasize the many complex romantic relationships between its characters. Moses Chan (陳豪) plays Ko Lau Fei (高流斐), a celebrated Kunqu Opera master who enters the Forbidden City to perform for the court. There he becomes the darling of the imperial harem and was soon caught in a love triangle with Consort Yu and her wet nurse Sheung Ling (湘菱), played by popular actress Ada Choi (蔡少芬).

The long-awaited sequel will be the final TVB production from acclaimed producer Jonathan Chik (戚其義) and scriptwriter Chow Yuk Ming (周旭明). In an interview, Chow Yuk Ming described Beauty at War as a love letter to fans of the first series. He believes that while first-time viewers may find the sequel typical, existing fans will likely discover something special. Chow added that Beauty at War will not follow the recent trend of dramatic harem politics, but will instead focus on loneliness and the human condition.