“The Hippocratic Crush 2” To Be Better Than Its First? 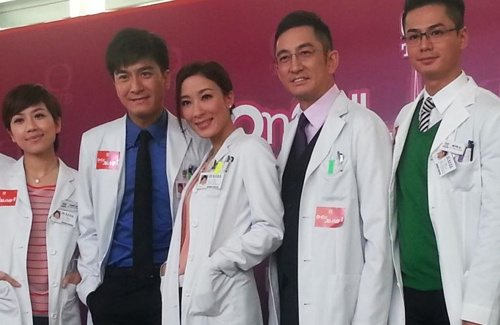 Highly anticipated anniversary series, The Hippocratic Crush 2 <On Call 36小時II>, is airing on November 4. Continuing the storyline of the popular first installment, the sequel features the same main cast with the addition of Lawrence Ng (吳啟華). Viewers’ favorite couple, Kenneth Ma (馬國明) and Tavia Yeung (楊怡), will spark greater romantic chemistry as a married couple. Filmed at the Queen Elizabeth Hospital, the series will showcase realistic settings with professional medical devices. According to the cast, the sequel consists of more outstanding components than its first installment, hoping to garner high viewership ratings.

Lawrence, who is most memorable for his role as Dr. Paul Ching from the Healing Hands <妙手仁心> installments, expressed excitement in portraying a doctor once again. In The Hippocratic Crush 2, he plays pathology specialist Dr. Lok Man Sang. Although Lawrence’s doctor characters seem very similar, they come from completely different backgrounds. Dr. Lok had a tragic life due to the loss of family members, and suffers from autism. Lawrence emphasized he did not allow the characteristics of Dr. Ching to creep into Dr. Lok, and had approached his new role from a whole other perspective.

On the other hand, Fan Tze Yu (Tavia Yeung) and Cheung Yat Kin (Kenneth Ma) share many emotional scenes. Unfortunately, Tze Yu’s intramedullary spinal cord tumor begins to affect her career, making her incapable of performing surgeries on patients. Dr. Lok helps her regain strength and Tze Yu soon learns she can help her patients in other ways. She gives up her position as a cardiothoracic surgeon and switches to the field of pathology. Yat Kin disapproves of this decision and starts a quarrel with Dr. Lok. Tze Yu also becomes pregnant, and the struggle between keeping the baby or not stresses the difference in opinions of the married couple. The pressure Yat Kin faces from all aspects of his life mounts into depression, but Tze Yu consoles him and tries to help him see through.

Although Lawrence and Kenneth resemble rivals onscreen, they are actually very good friends. “Kenneth is very professional. He has his script memorized every time we start filming. I was so happy working with him,” Lawrence expressed. He hopes their different acting styles will make the drama more enjoyable for the audience.

As for the drama’s popular couple, Kenneth commented on his collaboration with Tavia. “She is a very good partner. Every time I work with her, we spark greater chemistry. I feel very comfortable when we film together, and hopefully there are more chances in the future.”

39 comments to “The Hippocratic Crush 2” To Be Better Than Its First?