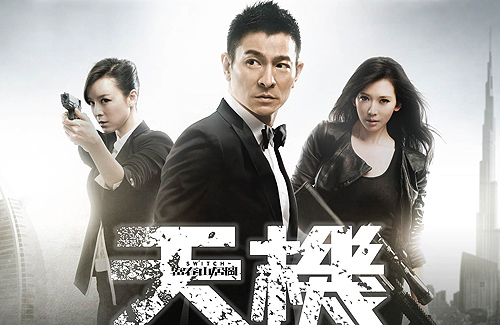 Andy Lau’s (劉德華) new movie, Switch <天机·富春山居图> is a glossy spy thriller featuring the latest special effects. Although Switch generated poor reviews, it has grossed over 200 million RMB in mainland China since its opening on June 9 due to lack of competition at the box office.

Switch centers around the recovery of famous painting, “Dwelling in the Fuchun Mountains”, in which Chinese agents, Japanese triads, and English thieves are after the national treasure. Andy is involved in a love triangle with his wife, played by Zhang Jingchu (张静初) and his Japanese lover, Chiling Lin (林志玲). Putting their love rivalry aside, the two women join forces to save Andy from the clutches of ruthless Japanese triad leader, Tong Dawei (佟大為), who has a sadomasochistic relationship with his triad spy, Chiling.

Although the visuals of Switch were praised, audiences were much harsher towards the film’s plot. Viewers criticized that Andy Lau, Chiling Lin, and Zhang Jingchu’s characters appear randomly onscreen in disjointed scenes. Director Sun Jianjun’s vision for the film was also mocked, in which horrific, comedic, and cartoonish elements were also haphazardly glued together.

Andy’s love triangle with Chiling and Jingchu failed to evoke any empathy, instead making viewers laughed in disappointment. One viewer remarked, “There’s basically no story for the entire movie. Andy Lau only needs to look handsome. Chiling Lin constantly changes her wardrobe and reveals her beautiful legs. Both are big stars; are they that desperate for money?”

Despite the poor reviews, Switch generated strong ticket sales this week due to lack of competition at the mainland box office. Blockbuster films, Peter Chan’s  (陳可辛) American Dreams in China <中国合伙人> and Vicki Zhao’s (趙薇) So Young <致我們終將逝去的青春>, have already been released in theaters for more than three weeks and six weeks respectively.