Charlene Choi and Ekin Cheng in “My Sassy Husband” 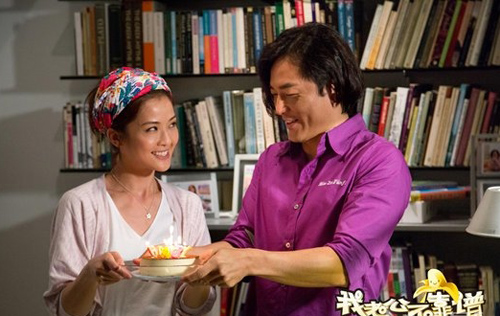 Ten years ago, movie goers enjoyed the onscreen chemistry between Charlene Choi (蔡卓妍 ) and Ekin Cheung (鄭伊健) in My Wife is 18 (我老婆唔夠秤), where Charlene played Ekin’s wife, who was 12 years his junior. This holiday season, fans can once again re-live the romantic comedy between the duo as My Sassy Husband <我老公不靠譜> premiered last week. My Sassy Husband follows Yoyo Ma (Charlene Choi) and Thirteen Cheung’s (Ekin Cheng) union 10 years later to present day where they are experiencing marital problems. After they realize that their wedding ceremony held in London is not considered official in Hong Kong, they decide to part ways in search of their real love. While Yoyo and Thirteen both start dating new prospects, will they end up back together? Or is their relationship done for good? Fans will have to watch for themselves to find out.

Because My Sassy Husband is the only romantic comedy to be released this holiday season, movie goers were eager to break away from the usual dark films and enjoy a lighthearted comedy. The hilarious sequence shows how Thirteen is put in misery due to Yoyo’s tricks such as: pouring cold water on him, pretending to be a ghost, turning off the electricity, gifting him a rat as a gag gift and throwing cake in his face. Additionally, one of the hooks of the film is the revelation of Thirteen’s “secret diary” at the end of the film.

Director James Yuen (阮世生) revealed that the “secret diary” sequence was initially to be reminisced by Yoyo in the film, but  during filming, Charlene suggested to actually film the tricks being mentioned in order to bring more of a realistic and funny look at the couple’s relationship.

The idea apparently worked because early reviews from audiences show that the film is very well received.  An online reviewer wrote, “Every single minute of the film was so entertaining – I didn’t even want to use the restroom! I laughed and cried throughout the movie, it was one of the best films I watched all year!”