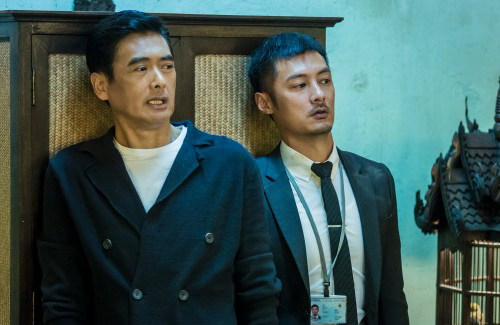 Knowing that he has to work with Chow Yun Fat, Shawn was very nervous going into the film. However, he was surprised to find how relaxing it was to work alongside Chow Yun Fat and Nick Cheung. “They are fantastic and representative actors in Hong Kong. Fat Gor and Nick have won many awards, and working with them is actually very relaxing. They would joke around on set, creating a light atmosphere.”

While filming gunfire scenes side-by-side with Chow Yun Fat, Shawn said he felt as if he was filming the classic 1989 film The Killer <喋血雙雄>, which starred Chow Yun Fat. Shawn said Chow Yun Fat would use a mirror to watch the movements behind his back, and advise Shawn on the proper angles on how to hold his gun that is fit for the camera.

Chow Yun Fat also said that he is very satisfied with his new disciple, “Shawn has many female fans. He is definitely handsome, and his performance is very natural. The world will be his for the next 20 years!”