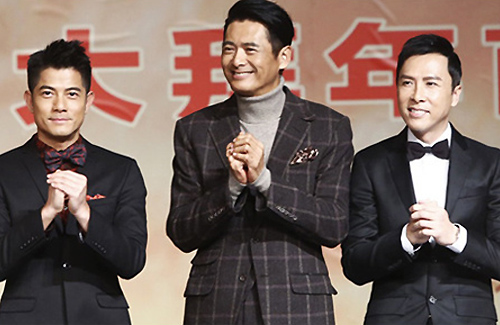 The cast of Cheang Pou Soi’s (鄭保瑞) fantasy adventure film The Monkey King <西游記之大鬧天宮> attended its first global press conference in Beijing on January 19, 2014. While describing their shooting experiences for the 3D film, lead actor Chow Yun Fat (周潤發) said that though he had fun in the film, he remarked that costar Donnie Yen (甄子丹) was really hard to work with, joking that he needed to improve his temper.

“It literally took five hours to put all that makeup on him. Then afterwards, he would have to fight. When he didn’t have to fight, he had to watch other people fight. Sometimes, he wouldn’t be able to control his temper, but it’s understandable. He’s suffered enough. It’s okay, once he rests he would be all better again. Do well as Monkey King,” Chow Yun Fat said to Donnie.

Donnie retorted, “I really don’t want to speak too much because [Chow Yun Fat] is a senior, but I do want to say this: Fat Gor is very expensive, so we cherish all of his scenes. And then his wife was always next to him, always watching Aaron Kwok (郭富城) and I.…”

Chow Yun Fat interrupted with a laugh, “Alright, time’s up!”

Aaron Kwok, who portrays the Ox King in the film, agreed with Chow Yun Fat and said, “I do hope he can control his temper a bit!”

Donnie later clarified in an after-press interview that he cherished working opposite Chow Yun Fat and Aaron Kwok; The Monkey King cast and crew was a dream team gathering together the industry’s best talents. As for Chow Yun Fat calling him out as someone who could not control his temper, Donnie said, “He’s just joking. I’m not offended!” May it be because you have high demands? “I’ve always had them.”

The Monkey King is a fantasy film that retells the origin story of the legendary hero Sun Wukong, known as the Monkey King, who ambushes the Heavenly Kingdom after the Jade Emperor demotes him as a lowly protector for horses. He rebels against the Kingdom and single-handedly defeats Heaven’s powerful celestial army. The Jade Emperor finally manages to imprison Sun Wukong when the Taoist and Buddhist army steps in to help.

Also as the film’s action choreographer, Donnie Yen stars as the titular Monkey King. Chow Yun Fat, who stars as the Jade Emperor, shared that he was a bit disappointed with his role, “When I think of the Jade Emperor I would imagine a guy who just sits there eating fruit and watch beautiful girls dance all day. But in the film, I always have to stare at a piece of cloth and fight. I had to get myself drunk so I can imagine those beautiful girls again,” he joked.

Taiwanese actress Joe Chen (陳喬恩), who portrays Princess Iron Fan, praised Aaron to be the most handsome Ox King in cinematic history. Aaron laughed and said he has been hoping for a sequel of the film to get the green light, saying, “I really want to know how Ox King got Princess Iron Fan pregnant. That way we can do intimate scenes together! I am also curious to know what they do in bed!” Aaron added.

The Monkey King will premiere in Hong Kong on January 30 and in mainland China on January 31. The film will also be competing against the Lunar New Year film From Vegas to Macau <賭城風雲>, which also stars Chow Yun Fat.