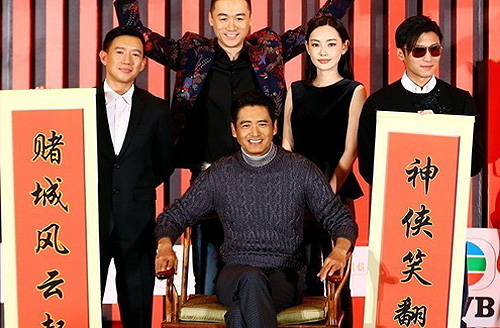 Chow Yun Fat (周潤發) has become the new face of the Lunar New Year, as two of his films, the 3D movie The Monkey King <西游記之大鬧天宮> and the comedy action film From Vegas to Macau <賭城風雲>, will be competing against each other at the box office. Both films will premiere on January 30 in Hong Kong and January 31 – the day of Lunar New Year – in mainland China.

After attending a global press conference for The Monkey King on January 19, Chow Yun Fat stayed in Beijing for a few more days to attend the press conference for the Wong Jing’s (王晶) From Vegas to Macau, which also stars Nicholas Tse (謝霆鋒) and Chapman To (杜汶澤). Portraying a master-level conman in the film, Chow Yun Fat joked that it was Nicholas’ father, Patrick Tse (謝賢), who taught him the art of conning. “I find it amusing that I have now become Nicholas’ teacher,” Chow Yun Fat said with a laugh.

Nicholas immediately backed away and bowed humbly, “I do not dare to!”

When a reporter asked Kimmy Tong (童菲) and Gao Hu (高虎) if they preferred Nicholas or Chow Yun Fat, Nicholas immediately walked off stage and pointed at the press, “It’s okay if you make me feel bad, but don’t make Fat Gor feel sad! Think carefully before you ask!” Chow Yun Fat chirped in, “It’s okay! I will not film movies for another three years!”

“From Vegas to Macau” Trailer