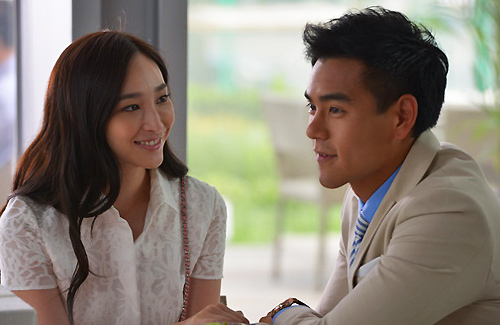 Taiwanese actor Eddie Peng (彭于晏), mainland Chinese actor Jiang Jingfu (蔣勁夫), and the rest of the cast and crew of A Wedding Invitation <分手合約> held a celebratory banquet to commemorate the film’s box office success. During the event, Eddie shared about his first love and denied the rumors that he had fallen in love with Taiwanese actress Pace Wu (吳佩慈).

Five days after opening in theaters on April 12, A Wedding Invitation has garnered almost 100 million RMB in box office sales. At the celebratory banquet, 31-year-old Eddie shared that he saw the film as a transformative work in his career, explaining that “this work means I’ve left the age of idol dramas and have formally crossed over the boundaries of being a ‘kid-adult.’”

Being an adult, however, brings its own share of problems. Recently, the media reported that Eddie said he was attracted to Pace Wu, who plays a supporting role in A Wedding Invitation. The situation became more awkward when Pace stressed that she felt nothing whatsoever for Eddie.

When asked to clarify the situation, Eddie said his words had been misinterpreted. “Actually, they asked me if I would personally pick Bai Baihe (白百何) [the movie’s female lead] or Pace Wu,” he responded. “I said that I would pick the character that Pace Wu portrayed.” Eddie also stressed that he has worked with Pace many times and that he greatly admires her as an actress.

The touching love story in A Wedding Invitation naturally led to curiosity about Eddie’s own love life. However, Eddie was unwilling to reveal too many details and only said that his first love happened during his first year at university. “When I think back on it,” he reflected, “it’s still very touching.” Nevertheless, he refused to disclose more details, as he did not want to get caught up in the memories.

Because Bai Baihe, the female lead of A Wedding Invitation, is currently filming her new movie, which will be directed by Feng Xiaogang (馮小剛), she was unable to attend the celebratory banquet. Instead, she sent her husband, singer Chen Yufan (陳羽凡), to appear on her behalf. At the banquet, Yufan revealed that he had promised Baihe that if her second movie broke 100 million again, he would go skinny-dipping. Judging from the popularity of A Wedding Invitation, it seems as though he will have to make true to his promise.