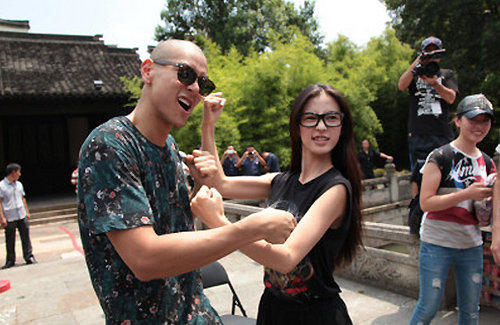 Rise of the Legend <黃飛鴻之英雄有夢> is the latest film adaptation of martial arts hero Wong Fei Hung’s life. Produced by Edko Films, Irresistible Delta, and BDI Films, the movie has a budget of 130 million RMB and promises thrilling kung fu scenes. The production crew kept all details secret, including Eddie Peng’s (彭於晏) role as Wong Fei Hung, until the official blessing yesterday. Angelababy will be the female lead in the movie.

Eddie already shaved his head for the role. Training under a martial arts master to learn the southern fist fighting style for some time, Eddie practiced ten hours a day and often soaked through several shirts in the 40-degree Celsius weather. “I’m actually very interested in martial arts. My martial arts master always compliments me and said I have the long limbs necessary for learning.”

Wong Fei Hung has been most notably played by Jet Li (李連杰), Vincent Zhao (趙文卓), and Jackie Chan (成龍) in past films. Landing such a heavy role, Eddie has big footsteps to fill and realized that “playing Wong Fei Hung requires fighting and not talking.” He added, “Each time there is a new version out, people will compare it with the older versions. I have been watching Wong Fei Hung films since I was a kid, and remember each fighting sequence.”

Eddie revealed that he had lost sleep for several nights when he found out he was selected to play Wong Fei Hung. “Obviously, I would be slightly nervous. Every time I went to sleep, I would dream of Jet Li because his version of Wong Fei Hung was legendary. However, I never thought of wanting to surpass anyone, I just want to be myself.” Eddie will try his best and he will gladly accept the challenges that will come his way, believing that this version of Wong Fei Hung will be just as fantastic as the others.

Angelababy added, “To be able to work with such a wonderful director and actors is truly an honor. I’m also hoping that my performance in this version of Wong Fei Hung will become a classic!”