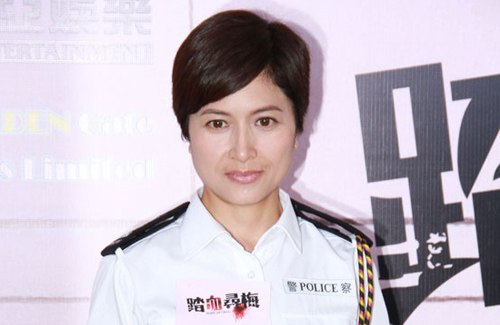 Dressed in a police officer costume, Maggie immediately became the main focus. Wearing a shiny wedding band on her ring finger, Maggie was asked if she recently got married. Maggie instantly replied with a “Yes,” causing reporters to be stunned. Realizing the impact her words has caused, Maggie swiftly explained, “Yes, in the movie. I’m portraying a married female police officer with two children in the movie.”

On the topic of getting married to her boyfriend, martial artist Vincent Sze (施祖男), Maggie jokingly responded that her big plan includes continuing to film for TVB. However, in all seriousness, Maggie stated that having a marriage certificate in the future is still better than not having one at all.

Recently, numerous nude photos of Hollywood actresses were stolen and released onto the Internet. Victims included Jennifer Lawrence and model, Kate Upton. Worried for the actresses that are affected, Maggie said that technological advances can become dangerous, and it is important to be very careful. When Maggie found out that the photos were stolen through their i-Cloud accounts, she was thankful that she was not familiar with the concept and don’t know how to use i-Cloud to store and transfer photos.

12 comments to Maggie Shiu Jokes About Her Marital Status