Nick Cheung Endures 5 Hours of Makeup for “That Demon Within” 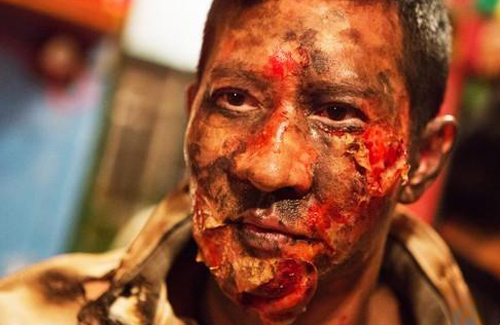 Recently, That Demon Within revealed some frighteningly graphic stills. The most visually arresting photograph depicts Nick gazing malevolently at the camera with almost all of the skin on his face burned and peeling. The effect, which required five hours of makeup to create, is so disturbing and realistic that many people may have difficulty looking directly at the false burn injuries.

The fire scene was one of the most dangerous scenes they filmed for the movie, according to director Lam. “Houses in Hong Kong are very small,” he said. “When the fire started burning inside, it was like an oven, scalding hot, so we were all very nervous.”

But despite the risk, Nick insisted on filming all of his scenes himself, even refusing a stunt double for faraway shots in which his character is wearing a mask. He explained, “Everyone is different, from your posture to your gun-shooting technique to your character’s murderous aura.”

Some viewers may question Nick’s near obsession with filming scenes to perfection, but the practice seems to work for him. At the 33rd Annual Hong Kong Film Awards on Sunday night, he picked up his second Best Actor Award due to his performance in Unbeatable <激戰>. In order to attain the appropriate physical look for that film, Nick had to work out for half a year.

Though Nick says that filming for That Demon Within is not as physically taxing as acting in Unbeatable, the process is still a lot of work. “I don’t have to prepare or use up as much physical energy as I did for Unbeatable,” he shared, “but mentally, playing this role [in That Demon Within] is even more tiring.”

That Demon Within, which also stars Daniel Wu (吳彥祖) as a policeman, will open in theaters on April 18 in mainland China, Hong Kong, and North America.