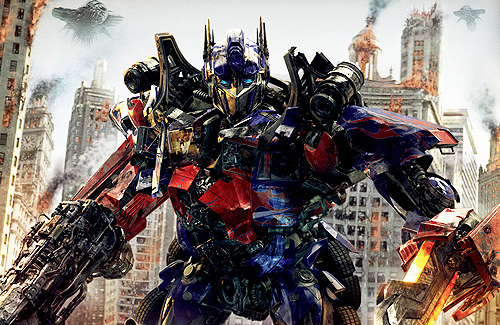 The cast and crew of Transformers: Age of Extinction arrived in Hong Kong on October 16 to begin their location shoot. A joint production between China and Hollywood, Transformers 4 will include several Chinese artists, giving them a chance to shine on the global stage.

Chinese actress Li Binbing (李冰冰) is one of the famous local talents recruited for the film. With previous Hollywood experience under her belt, Bingbing is clearly confident in her celebrity status and embraces her fame like a true diva. Accompanied by two bodyguards, BingBing appeared cold and distant, saying little as the press approached her at the airport.

Bingbing finally stopped to answer questions after much cajoling, allowing reporters one minute of her time. She shared that she is staying in Hong Kong for two weeks and praised director Michael Bay, saying “He is a great director, and very professional!”

Director Bay and the film’s star Mark Wahlberg were friendlier during their press encounter. The group happily greeted the crowd and allowed them to snap photos. When a reporter was accidentally pushed onto the ground, the stars immediately apologized and expressed concern. Although Chinese funding is probably a major reason behind the production team’s decision to film in Hong Kong, Bay’s own interest in the city also plays a part. “Hong Kong is a beautiful city. There are aged buildings and skyscrapers all around. It has the best of both old and new.”

With its captivating skyline and metropolitan landscape, Hong Kong has been a popular location choice for Hollywood action movies. The city was most recently the backdrop of summer blockbuster Pacific Rim. As interest and investment in Sino-American productions continue to rise, Hong Kong remains a marketable asset and has the potential to become a major Hollywood playground.

Transformers 4 is slated for release in June 2014.