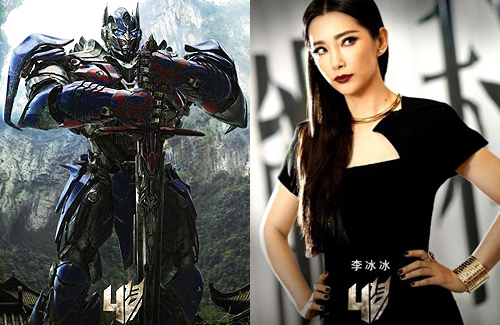 Transformers: Age of Extinction <變形金剛4：絶跡重生>, the fourth installment in the live-action Transformers film series, is set to open in the United States on June 27, with hopes that it will release on the same date in mainland China. Transformers 4 recently released two new promotional posters, including one of mainland Chinese actress Li Bingbing (李冰冰).

As a joint China-Hollywood production, Transformers 4 required at least one Chinese face in its acting line-up. Li Bingbing, whom English-speaking audiences may recognize from The Forbidden Kingdom <功夫之王:> and Resident Evil: Retribution, seemed like an appropriate choice. In this Transformers film, she plays Su Yueming, who has been called “the mother of Transformers” because she is the CEO of a Transformer manufacturing company.

In the newly released poster, Yueming is dressed in a sharply cut black dress and adorned with golden jewelry. As one third of the movie’s story takes place in China, with a full thirty minutes dedicated to scenes in Hong Kong, Bingbing should be granted adequate time to shine in her role. Transformers 4 also unveiled a second poster, this one featuring Lockdown, the movie’s antagonist, and his ship. In the Transformers animated series, Lockdown used to be an Autobot who became a bounty hunter after he was disgraced by his master, whom he later murdered. At one point, he was in possession of an electromagnetic generator that could disable and destroy other Transformers. Although he is often linked to the Decepticons, Lockdown is actually willing to serve whoever can offer the highest reward.

Lockdown, whose design is based on a Lamborghini Aventador LP700-4, appears to have been redesigned for the live-action film. Though his exact role in Transformers 4 is still a secret, fans have guessed that it will involve a rivalry between him and Decepticon leader Galvatron.